Along with Tressel, Youngstown Mayor Jamael Tito Brown and Jim Kinnick, executive director of Eastgate Regional Council of Governments, were part of the delegation.

The proposed Youngstown Smar²t Network Project will renovate Fifth, Rayen and Park Avenues and Front and Commerce Streets, according to the Eastgate Regional Council of Governments proposal.

All delegates were part of promoting the Youngstown’s application for $10.2 million in federal funding, Tressel said. 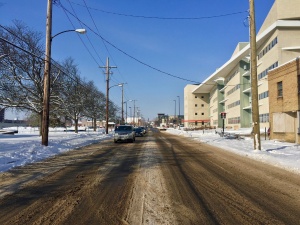 According to the proposal, if the federal grant is awarded, project partners will match $10.2 million bringing the total capital cost of improvements to $20.4 million.

Tressel said the project will consist of reduced lanes in both directions on Fifth, Rayen and Park Avenues and Front and Commerce Streets. He said there is no longer a need for wide roads because Youngstown is no longer a transport area.

“It is a residential, art, educational, infrastructure area,” Tressel said. “We don’t have 175,000 people coming to the city to work.”

Tressel said students will be able to walk, drive or take the shuttle to their destinations in the city.

Kinnick said the new project is similar to the Wick and Lincoln Avenues projects, according to Eastgate’s first blueprints.

The project will include crosswalks, landscaping, new street lighting and medians.

A bike share program and bike lanes that will connect to Mill Creek Park are also part of the proposal.

Kinnick said he hopes to collaborate with the Western Reserve Transit Authority to install bus stops on the renovated roads.

The city will also install a right-hand turning lane into the M-60 parking deck on Fifth and Lincoln to help improve traffic flow.

Tressel said he hopes to have shuttle services to transport the public from Mercy Health to downtown to YSU. 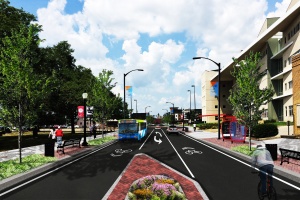 Brown said the project will help Youngstown financially and improve the quality of life and safety in the city.

“It will create jobs and will give citizens the access to go to businesses,” Brown said.

Brown said sewer lines on Fifth Avenue will be repaired whether Youngstown receives the grant or not.

Kinnick said the project has been in the works for one year, but construction will take seven years.

“Last year, we were one of 350 submissions, but were not chosen as a project receiving the grant,” Kinnick said. “This year, we are hopeful.”