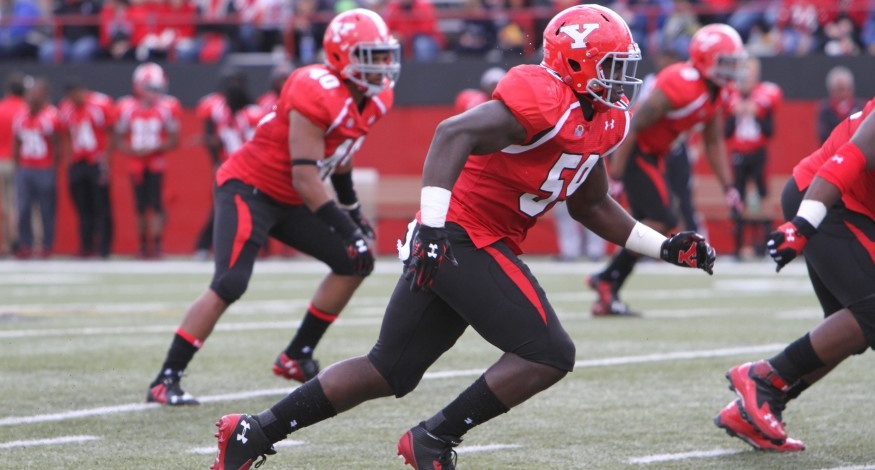 It’s been three years since Youngstown State University defeated the University of Pittsburgh 31-17 at Heinz Field — recording its first win against a Bowl Championship Series team.

The Penguins finished last season 7-5 [4-4] and missed out on the Football Championship Subdivision playoffs for the third-straight season.

Bo Pelini, YSU’s head coach, will finally make his debut as a Penguin.

“From the first day, he told us that he has a blueprint on how to win — we’re going to follow it,” Zaborsky said. “If you’re not on board, it’s been set in stone — it hasn’t changed one bit. It’s definitely something I haven’t been used to. Coach Pelini is very determined and very set in his ways, and I think him being so focused allowed us to know exactly what we have to do. It just adds to our confidence.”

Pelini will not be the only Youngtown native making his coaching debut in the game. Pitt head coach Pat Narduzzi will make his head-coaching debut; the former YSU and University of Rhode Island linebacker was hired in December. Narduzzi played one season at YSU while is father was the head coach at YSU. Narduzzi transferred to Rhode Island after Jim Tressel was hired.

“I know Pat, I’ve known him for a fairly long time,” Pelini said. “I have a lot of respect for him; I think he’s a good football coach. I think he’s going to do a heck of a job there at Pitt. Obviously, he’s a Youngstown guy, and obviously outside of this game, I wish him well. I hope they win them all.”

“I was a year younger than Pat,” Pelini said. “When I was a junior, we played Ursuline and sophomore year too, but I didn’t play in that game. He was a good football player when he was at Ursuline.”

The Penguins will return to Pittsburgh for the first time since the upset victory over the Panthers in 2012 in the season opener on Sept. 5. YSU defensive end Terrell Williams played his first colligate game against Pitt.

“When we played them before, our backs were against the wall,” Williams said. “It’s always going to be like that, but it’s not really a challenge. I feel like the only challenge is ourselves and how we prepare. If we prepare right then we’ll be fine.”

The Panthers will be without their most explosive weapon, junior wide receiver Tyler Boyd, due to a suspension. In his first two seasons, Boyd had back-to-back 1,000-yard seasons. He finished last season with 85 receptions for 1,261 receiving yards and seven touchdowns.

Pelini said the first week of the season always brings a sense of nervousness. He said the coaching staff is trying to prepare the players as best as possible before kickoff on Saturday.

“There’s always that sense of the unknown. You get used to it, I’ve coached in a lot of football games,” Pelini said. “You want your kids to do well; you want them to have success. It’s more of a sense of teaching and making sure they’re prepared … you kind of look at them as your own kids. You want to make sure you do everything you can, everything in your power, to allow them to succeed.”