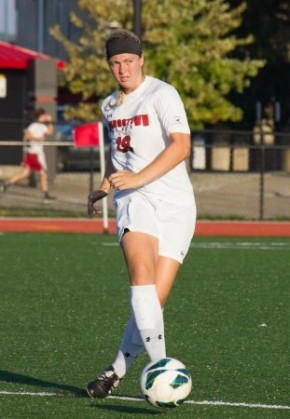 After an up and down season, the Youngstown State University soccer team looks to improve on a season that ended with a first round loss to the University of Wisconsin-Green Bay.

YSU entered the Horizon League Tournament as the #5-seed in the bracket after going 7-8-2 in the regular season. Despite a goal from midfielder Kathy Baquero 90 seconds into the contest against the #4-seed, Green Bay, along with eight saves from goalkeeper Katie Montgomery, the Phoenix outlasted the Penguins 3-1 back in November.

A new season is about to begin for seventh-year head coach Will Lemke and the team, which has 12 freshmen on the roster, like Maria Vitello, a midfielder out of Pittsburgh’s North Allegheny High, and forward Chantel Houk out of Brecksville-Broadview Heights High in Broadview Heights, near Cleveland.

Lemke said the new players have impressed throughout camp and the team is expecting to use several of them as the season is about to begin.

“As a unit, they’ve done a good job of getting integrated into our system and playing well,” Lemke said. “Right back Sara Magno will be competing for a starting job. Forward Chantel Houk from Akron has really impressed us with her dimensions of play, and she’s doing so well that we’re having to rethink what our lineups going to be because she’s shown a lot of creativity and a lot of scoring prowess. Midfielder Madison Hughes from Howell, Michigan has shown great pace and stamina. She’s a girl who could play a variety of positions so she’ll be vying for a lot of minutes early in the season.”

“We thought we were going to start the season with that #1 jersey [starting goalie] up for grabs,” Lemke said. “But Katie Montgomery has really taken charge of the position, as well as a leadership position. She looks very sharp. We feel like she’s going to be starting the season as #1, and the other two, Elizabeth Balgoyen and Brittany Hoskins, will be fighting for the #2 jersey.”

Lemke believes there are several impact players on this year’s team who are returning starters from last year, with Riese and Montgomery among them.

“Macey [Riese] and Katie [Montgomery] have been dominating and creating a lot of organizational and physical control,” he said. “There’s also Kathy Baquero, a second-team all-conference selection last year, and Chantel Houk — both will be showing a great deal of impact early on. Katie Hohmann and Karlee Kline worked very hard in the offseason and they’re showing the ability to make big plays from the outside position.”

Lemke zeroed in on one road opponent as the toughest — Wisconsin-Milwaukee.

“That game is going to be tough because it’s a long trip. Last year was the first time in the history of the conference where they didn’t make the Horizon League Tournament,” Lemke said. “We beat them last year, so I know they’re going to be out for blood.”

“Kelsey [Hunyadi-Coli]’s been on national championship teams with Kentucky and Louisville, and Megan [Giesen]’s coming in from Buffalo, who won their conference tournament and made the national tournament,” he said.

Lemke thinks YSU is a contender to take the league championship this season.

Riese says that each of her new teammates brings something different in terms of personality.

“I think it’s a great group of girls,” Riese said. “We’ve had a lot of fun with them so far, and I think everyone is meshing well with our team. I’ve had the most interaction with Sara Magno, and I think she’s doing well getting integrated into our defense.”

Like her coach, Riese also believes that this team can run the table and contend for a league title.

“I want to go 22-0,” she said. “I truly believe that we can win every game that’s on our schedule this year, and beyond that, into the tournament. I think that we can absolutely contend for the league title without a doubt. We’ll be in the tournament and be the champions this year.”