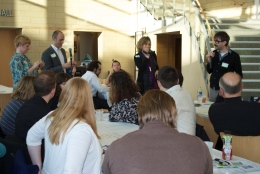 Stephe Kamykowski (right) talks at the Overture restaurant about what he wants to see done in the Mahoning Valley at the Northeast Ohio Sustainable Communities Consortium’s Vibrant Northeast Ohio initiative. Photo by Kevin Alquist/The Jambar.

To collect and distribute ideas while building a sense of community, the Northeast Ohio Sustainable Communities Consortium, or NEOSCC, invited young people from the Mahoning Valley to gather at the Overture restaurant on Tuesday evening.

NEOSCC focuses on increasing the quality of life within the 12-county region that makes up northeast Ohio and includes Mahoning and Trumbull counties.

Anthony Kobak, NEOSCC project manager for housing and communities, was in attendance, and he stressed diversity and fresh ideas.

“What do we need to do to make this area vibrant and find out what’s missing?” Kobak, who worked as a Youngstown city planner for eight years, asked the crowd of nearly 100.

Attendees were asked at the door to write on a nametag what they believe “vibrant” looks like and encouraged to talk with people they didn’t already know.

Tuesday’s event was the second in a series of four that is part of the Vibrant Northeast Ohio initiative. NEOSCC held a similar gathering in Canton on April 17 and will also meet in Cleveland and in Elyria in the coming weeks.

“The only way our region will become more sustainable is if it’s inclusive of everyone’s ideas,” Kobak said in a press release.

“Young people look at our region’s challenges with fresh eyes and new ideas.”

The tables were covered in paper, and Dan Moulthrop, curator of conversation and co-founder of the Civic Commons, asked those sitting down to write positive or negative things about the area.

Stephe Kamykowski, an industrial designer for the Youngstown Business Incubator, wanted a continued increase in job opportunities and for citizens and politicians to learn from previous mistakes.

Mike Ray, a 35-year-old Youngstown city councilman, said he represents the area’s younger demographic. He told members of the crowd to support local shops and restaurants, and to rely on themselves.

“We must manufacture our own opportunities,” Ray said.

Many at the event were Youngstown State University students or alumni.

“It’s refreshing to see a deliberate attempt to take a step forward with the ideas that we’ve talked about informally,” said Andrew Emig, who is working toward a master’s degree in chemistry.

Sean Satterlee, a biology graduate student, said he wants Youngstown to learn from the past and not be a one-trick pony.

“We need to harness new ideas from young people who care,” Satterlee said.

“We want to see dialogue about what’s great about the region and talk about what can be improved,” Brown said.

NEOSCC is largely funded by a federal grant from the U.S. Department of Housing and Urban Development as part of a new federal initiative.