Homecoming was spoiled for the Youngstown State University football team (3-5, 1-4, Missouri Valley Football Conference) falling in front of a crowd of about 12,000 in a 35-0 loss to Illinois State University (6-2, 4-1 in MVFC ) their first shutout since 2008.

With its playoff hopes nearly dead, YSU will go on the road this week to face Indiana State University (0-8, 0-5 in MVFC). 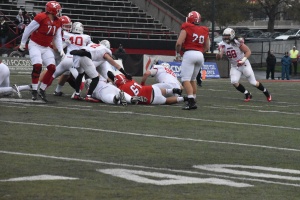 “It was a real big eye-opener and a gut check for us,” YSU center Vitas Hrynkiewicz said about the past game.

The Redbirds were in control from the start scoring two touchdowns in just 45 seconds in first quarter alone. ISU, despite only managing 47 yards in passing, managed a successful attack on the ground with the duo of tailbacks Markel Smith and James Robinson combining for 241 yards.

In a game with not much upside for the Penguins, a few bright spots were evident. The pass defense held the Redbirds to just 42 yards on six completions. Special teams would show some promise with freshman back Christian Turner getting 52 yards on two returns.

After the game, YSU Head Coach, Bo Pelini, voiced his disgust while calling the game an embarrassment and apologizing to the city along with anyone affiliated with YSU.

His strong words were reiterated when speaking to the press this week though he was kick to blame himself for the team’s struggles.

“The way I sum it up is that I’m responsible for the product that goes out on that field,” Pelini said. “I need to coach it better, I need to get the team prepared better and that’s what I’m setting out to do.”

Hrynkiewicz said the game only added extra motivation for the Penguins heading into their next contest.

“I don’t think the people really understand how excited we are to play this week,” Hrynkiewicz said. “After that embarrassing loss all we’ve been thinking, all we’ve been wanting to do all weekend is go out to Indiana and make a statement win.”

“When you have adversity you have to make a play to get it turned around the other way and we’ve had those opportunities, we haven’t been taking advantage of them for whatever reason,” Pelini said.

The Sycamores are a team that has struggled. ISU is coming off a 59-20 loss to Missouri State University, which keeps it winless on the season. A focal point for the team will be receiver Bob Pugh who is ranked fourth in the country.

YSU holds a lopsided advantage in the season series leading 21-5.

In their last meeting, some late game heroics helped YSU squeeze out a 13-10 victory after notching a late game comeback. The teams have played close games in their past three matchups against one another.

He also added that the team was going to have to pick itself up moving forward to get tough wins.

“This is the ultimate team game,” Pelini said. “You need 11 guys being in sync play after play to play at a high level.”

With just three games left in the season and playoffs nearly out of sight, the Penguins still feel they have something to prove.

“We’re gonna work hard,” Hrynkiewicz said. “We have to go out and show everyone that we can rebound, we can come back.”

Pelini announced senior and former starting quarterback, Ricky Davis, may get the start this week for the injured Nathan Mays and recovering Hunter Wells.

In its next game, the Penguins hit the road to Terre Haute, IN to play ISU on Nov. 4 at 1 p.m.