Author Justin Gest discussed his new book, which suggests the white working-class is becoming the new minority in the United States, at the Youngstown Historical Center for Industry and Labor on Monday. 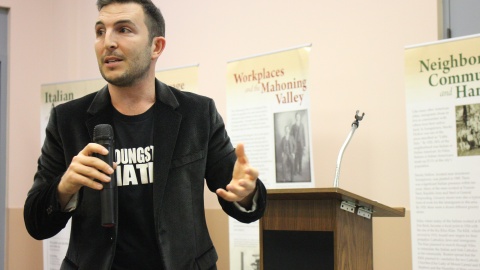 In his book “The New Minority: White Working Class Politics in Age of Immigration and Inequality”, Gest talks about a six-month study he conducted on people from Youngstown and Dagenham, England.

“What motivated me to study white working-class people was that I saw this sense of marginality amongst a group of people that formally defined the country which they lived,” Gest said.

He was interested in finding out what motivates some white people who belong to the working-class to drift towards radicalized political groups, and why they feel a loss of power and representation in government.

Gest, who is also a political science professor at George Mason University, said he mainly studies immigration and changes in demographics, so studying the white working-class in Youngstown was a big change.

He described Youngstown as a “post-traumatic city”.

“Unlike the trauma that other cities may have had in their economic and social lifetimes, the trauma in Youngstown is one where it was probably a lot more dramatic than other places,” Gest said. “Youngstown was Steeltown USA.”

Gest said Youngstown’s high nostalgia raised from its history is felt by everyone from the region, which makes it nearly impossible to get past.

“For so many people in Youngstown, the only way forward was backward,” Gest said. “This makes things incredibly contentious because backward is not just about the steel boom. It’s accompanied by all the challenges and associations that come with America and Youngstown’s past.”

Distrust is a social norm for people in Youngstown as well, Gest said. He said that’s powerful because it undermines the sense of social cohesion

This distrust is taken all the way up to the policymakers, according to Gest. He interviewed more than 75 people and many white working-class interviewees felt outnumbered in society and do not believe they have representation in the government.

When white working-class people represent at least one-third of the American population with minimal Congress representation, Gest said the feeling of externality is understandable.

Megan Evans, a YSU student who attended the lecture, said the idea of working-class discrimination was new to her.

“It was interesting to get a new perspective on things like that because [urban poverty and sociology is] what I study,” Evans said.

Finding representation in Washington is important to the white working-class, Gest said. He said this led to the wide support of Donald Trump in the presidential election.

“What they liked about Trump was that he told Washington where to go,” Gest said. “He was that anti-establishment Jim Traficant of the 21st century.”

The City Club of the Mahoning Valley sponsored the lecture. Phil Kidd, the coordinator of City Club, said he was impressed by the discussion and Gest’s research.

“I thought he did a pretty thoughtful analysis of looking at the Youngstown community,” Kidd said. “The number of people he interviewed, the amount of time he spent here and how deep he goes on his various arguments as to why he thinks working class people are voting this way.”

The discussion was followed by a question and answer session. Gest sold copies of his book at the event.