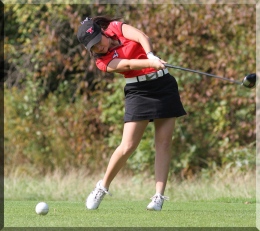 Emily Rohanna tees off during a recent tournament. Rohanna, a freshman, was the low scorer for the Penguins at the Robert Morris Invitational on Oct. 9. Photo courtesy of YSU Sports Information.

“I’m used to my team being first, second or third,” said Schwartz, head coach of the women’s golf team.

However, the Penguins have experienced mixed results through their first four tournaments.

Their high notes have been a second-place finish out of four teams at the Detroit Invitational and second out of five at the YSU Invitational.

But they’ve also placed sixth out of seven teams at the Cleveland State Invitational and third out of five at the Robert Morris Invitational.

“It’s tough on them when they compete and they don’t finish first, second or third because it’s sort of like an image of our team,” Schwartz said.

Still, Schwartz — who is the only coach in the program’s history and is now in her 18th year of coaching at YSU — said she is pleased with her team’s performance so far.

For their best score of the year, the Penguins shot a two-round total of 614 at the YSU Invitational, though they were ousted by the University of Detroit Mercy’s score of 609.

“This year, we don’t look like we’re doing as well as last year, only we’re doing better,” Schwartz said. “The other teams just shot some scores that were really low.”

“I really didn’t have anybody with a lot of experience, and I had to put freshmen out there who were decent golfers but not ready for the competition,” she said.

As for this year, Schwartz credits all of her players for being so dedicated.

“They will go and do even more than I expect of them,” she said. “They’re very goal-oriented. They set their goals, and they go after it — probably more than I’ve ever had a group do.”

“A week ago Saturday, I called off practice because it was rainy and wet, and I just didn’t want them out there getting sick for no reason,” Schwartz said. “But three of them showed up for practice just knowing that, and said, ‘We’re going to practice anyway.’ That’s a perfect indication. They went beyond of what I expected of them.”

Next up on the team’s schedule is the MAC Women’s Invitational. While it’s a preview of the Mid-American Conference, three Horizon League schools were also invited to the event: Cleveland State University, the University of Detroit Mercy and YSU.

“This will be a good judge because we’ll be with a lot of lower-scoring schools, and we’ll be competing with a league that is pretty strong,” Schwartz said.

Still, Schwartz said the main focus of her team is preparing for conference play.

“Getting ready for conference play is what we’re doing, though, mentally,” she said. “These kids need to know they can do it.”

And while excitement about this year’s team is high, Schwartz said she knows the future holds a lot of potential.

“I keep thinking that this year the girls are going do so well, but next year we’ll even do better because we only lose one senior,” Schwartz said. “I think we’re going to get there. I think we’re in the right direction; it’s just taken us a little bit of time.”