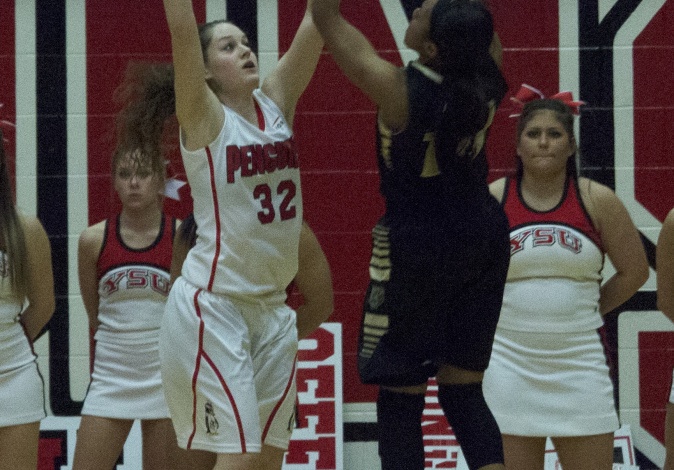 YSU is the #6 seed in the tournament, but maybe that’s not a bad thing. The Penguins will play Oakland University on Thursday, and YSU has won the first two games with the Grizzles this season.

The Penguins also have a 7-1 record against the other teams in the bottom half of the tournament bracket, including the #3 seed Wright State and #2 seed University of Wisconsin-Milwaukee.

“The sixth seed turned out pretty decent for us. I think we’re 7-1 total against the teams on our side of the bracket this season — so I guess that’s favorable,” YSU head coach John Barnes said. “Ultimately, come tournament time, it’s anybody’s game. You got to show up and play well and get the job done.”

YSU’s first round matchup will come against Oakland. The Penguins defeated the Grizzles 96-77 during the first game of conference play and 67-63 in their last game on Feb. 4 at the Beeghly Center.

“They’re very good all around. They’re deep, they have a lot of players that can score, they really like to push the pace — score in transition — they’re just a very good all around team,” Barnes said. “It’s going to be tough for us to try to keep them to a lower total, and obviously we got to score points. The last few games, we’ve had some players shoot well and some players not shoot well. We’re need everyone to have good nights to make a run at the tournament.”

One key to the game will be the turnover margin. In the two games with Oakland, YSU won the turnover battle 31-24. The Penguins have recently struggled to hold onto the ball. In the last two

“I think some of them … we weren’t quite as focused and sure with our passes as we were,” Barnes said. “Some were just trying to do some things that we shouldn’t have — instead of making an easy pass, trying to thread a needle through really tough situations. Defenses have kinda changed up a little bit against us, so that’s created a little bit of an issue and we’re gonna work on that.”

YSU could be without starting guard Alison Smolinski who suffered an injury during the opening minutes in the loss to Wright State. Barnes said Smolinski is listed as day-to-day and they will determine if she could play in the coming days.

The Penguins’ rotation features nine freshmen and sophomores that will have to play a key role in a potential run at a Horizon League title. YSU forward Janae Jackson, the only senior on the roster, said the players have gone up to here throughout the year and asked for her advice.

“They have asked me ‘do I every get nervous?’ and things like that. As a player, going out there and playing each game, everybody has nerves,” Jackson said. “When I talk to them, I tell them ‘go out and play the game like you know how.’ Sometimes it’s OK to be nervous, but once you get out there and you get those nerves, you just have to play. You can’t worry about what he said or what she said. You have to go out there and play your game because you control what you do.”

YSU hasn’t won four straight games since it started the season 7-0. Jackson said the team has to focus on “things that we can control” and try to get back into the mindset the team had in the firs half of the season.

“Hopefully it’s the YSU that was winning all those games at the beginning of the season,” Jackson said. “Obviously our goal is to revert back to that, get to the mindset to win all those games, take care of the ball, rebounding and doing all those things — that’s the team we’re expecting to come out and be…nothing less than that.”