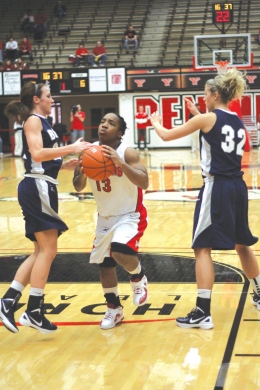 After losing to Butler University on Saturday by a last-second 3-pointer, the Youngstown State University women’s basketball team looks to regroup in two conference road games.

Senior guard Macey Nortey said in Monday’s press conference that the loss to Butler was frustrating, but there is always something to be learned when moving forward.

“Whether we are in a game and it comes close like last Saturday, or whether we just come out and flat out beat a team, you learn something,” Nortey said. “We still have a lot of basketball left. We just have to keep getting better.”

The Penguins had a chance with about two seconds left in the game. Nortey missed an opportunity for an open shot and passed to senior guard Kenya Middlebrooks, who ran out of time before getting up a shot.

Head coach Bob Boldon said in the conference that being in close games is a step in the right direction.

“Last year at this time, we weren’t even in a lot of close games, so it is nice we are in these close games,” Boldon said. “So I think the next step now is figuring out how to pull them out.”

In the previous meetings this season, the Penguins lost both games against UIC and Loyola. Boldon said the team would make the necessary adjustments to be successful.

“We are going to have to go with a different sort of adjustment,” Boldon said. “That is the thing that is exciting for me and our staff to try and think a little bit and create situations for our kids to be successful.”

Nortey said the UIC is the more athletic of the two teams that the Penguins will face.

“Their guards like to get out and run,” Nortey said. “They have a nice pull-up jumper game. We just have to be solid on defense and really understand our rules and follow everything we know how to do.”

The Penguins will be down a coach for the road trip and for the rest of the season. Assistant coach Jen Theissen left the program to pursue a career in human resources near Marietta.

“I am happy for her and her husband,” Boldon said. “It is a good opportunity for her, and unfortunately we cannot pick when those times come. It came at probably an inopportune time for us.”

The Penguins will move John Cullen to assistant coach, and Boldon is excited about this prospect.

“He has been a blessing,” Boldon said. “He has a wealth of basketball knowledge, [and] he has a ton of energy. It’s been good on a number of fronts. It’s been good for the kids just to hear someone else’s voice at practice.”

Loyola will provide a different challenge than the UIC, as Boldon said it is an efficient team offensively and possibly the best in the conference.

“We have to figure out a way to slow them down and guard them,” Boldon said. “We have one day to prepare for them, so it will up the ante to try and figure out how to guard those guys.”

With the Penguins now beginning to see teams for a second time this season, Nortey said there are aspects of these games that are easier.

“If they have a shooter that’s only shooting [3-pointers], you can run out and contest her, or if there is a guard that is driving, you can play her more straight up and honest,” Nortey said. “It is a lot easier on the defensive aspect.”

With five of the next seven games on the road, Boldon said this would be a tough challenge for the Penguins.

“We said before, [conference games] are all exciting,” Boldon said. “We are in conference play, and it is their challenges, but conference play should consist of challenges. We play two very athletic and two very skilled teams. We will get our money worth. That’s for sure.”