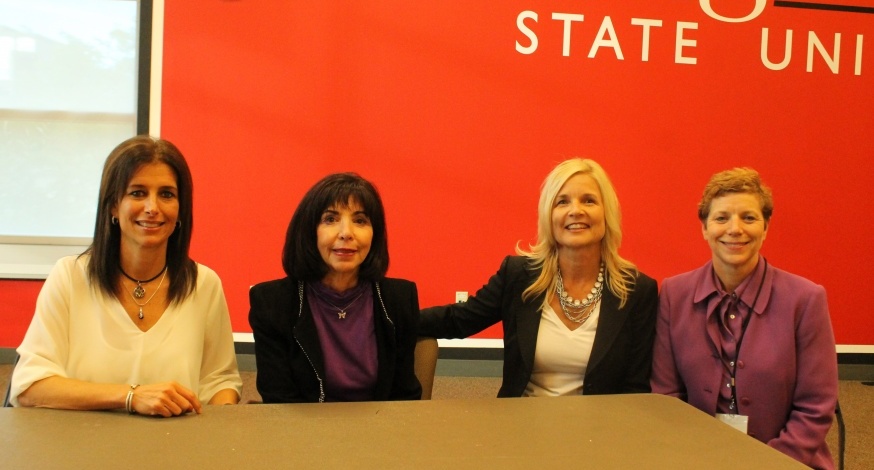 Despite societal barriers, women can be just as successful as men in the world of business and sports if they work hard, prove themselves and aren’t afraid to take risks.

That message was conveyed by Denise DeBartolo York and Manon Rhéaume at Women Breaking Boundaries, a fundraiser hosted by the Youngstown Business Incubator’s Women in Entrepreneurship program on Wednesday night at the Covelli Center.

York owns the San Francisco 49ers, and Rhéaume was the first and only female goaltender in the NHL. They discussed their experiences working in a male-dominated industry and encouraged women to chase their dreams despite the obstacles they face.

Rhéaume provided words of support to the crowd of 300 aspiring business owners, professionals and students.

“Don’t be afraid to take risks,” she said. “It was a big risk for me but what was the worst that could happen? I might have a bad game but so what? I wanted to see if I could do it, and I didn’t want to regret not trying.”

Even after competing in the Winter Olympics, Rhéaume said people overlooked her accomplishments and focused on the fact that she was the only woman playing hockey. When she moved on to coaching hockey, she still faced judgement by male counterparts.

York said every person needs a strong support system — including friends, family and faith — to help push them towards their goal. She said is proud that she never lost her temper when being treated unfairly and said having a good attitude is important.

“I try to always remain dignified and classy. I just get my point across,” she said. “Some of the boundaries are intense … but going through [them] gives you confidence and makes you more courageous.”

Rhéaume played an NHL game with Tampa Bay Lightning in 1992 and signed a six-year contract to play minor league hockey. She helped Canada’s women’s team win a silver medal at the 1998 Olympics.

A movie based on her success as a hockey player is scheduled to premiere in 2017. It’s called “Between the Pipes.”

York was previously president of the Pittsburgh Penguins NHL team during the 1990s. She became owner and co-chair of the 49ers in 2000, a team that was purchased by her brother in 1977.

York has become a mentor for young women, and she provides scholarships to help them succeed. Rhéaume coaches the Little Caesars girl’s hockey team in Michigan.

Lizzie Philibin attended the event. She was honored for becoming the first female on Cardinal Mooney High School’s football team as a placekicker. Like Rhéaume, her advice was to put yourself out there.

“You never know unless you try, and you can’t care what other people think,” she said. “Most will be supportive you but others will try to bash you. You just have to ignore them and do what  you want to do.”

Barb Ewing, chief operations officer at the YBI, said the event was meant to inspire, uplift and encourage women.