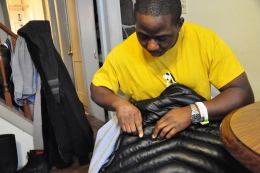 At his Liberty home, Jordon Wagner points to the holes in his bullet-riddled jacket hours after the shooting. Jambar file photo.

On Feb. 6, 2011, bullets were fired into a crowded party at 55 Indiana Ave., just north of campus. Eleven people were wounded, and one student, 25-year-old Jamail Johnson, lost his life.

One year later, the gunshots echo through victims’ memories as they recall that night.

Sophomore Jordon Wagner saw the initial fights break out in the house and said he had a gut feeling that something crazy was going to happen.

Wagner said he couldn’t see everything that was happening, but saw someone raise a gun and start shooting.

That’s when Johnson stepped in front of Wagner and the crowd in the line of fire.

“I heard the gunshots, but I didn’t even flinch. I didn’t hit the ground. I thought it was just them shooting in the air, like a warning shot,” Wagner said. “I turned around for a brief second, and when I turned back around I saw Jamail on the ground.”

Wagner then turned his focus to helping evacuate others.

“I wanted to check on him, but I kind of had a feeling that he was already dead,” Wagner said. “I was trying to get other people out, as many as I could.”

Sophomore DeShaun McDonald said he reacted immediately to the gunshots.

“Me and everyone around me hit the ground. At some point when I heard the shooting stop, I managed to get up and tried to reach the door,” McDonald said. “I had to go back ‘cause I was looking for my friend. When I went back in the house, that’s when we saw Jamail on the ground.”

McDonald said he saw Johnson on the ground but couldn’t make the connection right away.

“Then I saw the blood around him and everyone holding him,” McDonald said.

Senior and Alpha Phi Delta member Dylan Thomas was walking out of another fraternity house when he saw Johnson standing at the door. Two men proceeded to pull out a gun, he said.

“My friends ran the other way, and I stood there in shock,” Dylan Thomas said. “We ran down the street where the getaway car was literally driving through yards.”

Dylan Thomas said that blood splattered the house as he approached.

“I didn’t know that it was Jamail at the time. I knew someone was shot, but it was dark, and I was in shock,” Dylan Thomas said. “Reality started setting in that it really happened. We ran up there, and it was just chaos.”

Among the disarray, Wagner found his way out of the house to his car.

“When I was leaving the house, I was walking in the other driveway, and I felt a pain in my foot and I was like, ‘What is that? It’s probably nothing,'” Wagner said. “It was cold in February, so I thought maybe it was frostbite.”

Moments later, he requested assistance from a paramedic after realizing that he had been shot in the foot.

The paramedics asked Wagner if he had been shot anywhere else, and he was quick to respond that he hadn’t. The paramedics insisted, however, and told Wagner to remove his jacket.

“I took off my jacket, and there was a hole in my shoulder. I didn’t even know I got shot. People say I didn’t feel it cause I was in a state of fear, but I really wasn’t. I don’t know how I didn’t feel it.”

Jaleesa Moore, 21, was celebrating her birthday. She didn’t see much of anything. She noticed the music stop and people being pushed. Moore also suffered two injuries.

“When I got hit in the arm, I didn’t know at first. I went to catch my balance, and my arm hurt really bad,” Moore said. “And when I was hit in my side, I didn’t know until I got to the hospital.”

Moore drove to the party accompanied by her sister, who later drove her to the hospital.

Since the confrontation, Dylan Thomas, who is also the Interfraternity Council president, said he feels exponentially safer. The IFC, he said, has tightened the reins and insists that maximum security is achieved at parties.

“We want to be safe,” Dylan Thomas said. “Nobody ever thinks this could happen, and we have to be the safest we can be.”

Wagner said he always tried to be safe at parties, even before the event took place.

“I would always think about it,” he said. “Number one, I have to make sure they pat everyone down. Number two, I don’t need to be in a rowdy place. I feel like if someone tried to get in a confrontation with me, I would need to end that confrontation as soon as possible. People hold grudges to a malicious extent.”

McDonald agrees. When he goes out, it’s no longer just him and another friend, but a group of about 10 people, he said.

“I’ve been there before. It’s just one of those things that just happens. You can’t predict it,” he said. “This could happen anywhere. Our school is one of the safest in the country, and it happens other places, too.”

After the chaos ensued, Dylan Thomas said the first thing he thought to do was call his parents.

“I actually called my house phone. I don’t even know what time it was,” Dylan Thomas said. “I called my parents just to tell them I love them and thanks for everything they do.”

Danny Thomas Jr., Dylan Thomas’ father and an Alpha Phi Delta alumnus, said he wanted to get to his son as fast as he could.

“My wife got the call, and she said to me, ‘You better talk to Dylan,'” Danny Thomas Jr. said. “I told him to stay where he was and that I would shoot right up there.”

Dylan Thomas said his mother was always concerned about him living on the North Side of Youngstown, but that she has grown more accustomed to it.

Danny Thomas Jr., however, was always comfortable with it.

He recalled a time when anyone could walk into a fraternity house, adding that he gives the organizations credit for constructing invitation lists and recruiting a strong police presence.

“We’ve had this conversation since the time he started going out, to be aware of your surroundings,” Danny Thomas Jr. said. “But I’m impressed with YSU in the sense that they are much more strict about who they let in.”

Wagner said his parents’ concern with his whereabouts is an “understatement.”

“I’m at Walmart at 11 o’clock and they are like, ‘What are you doing out there this late? Get home.’ They always worry,” Wagner said.

McDonald’s mother is still anxious about him going out.

“My mom was pretty apprehensive about it. I didn’t go to parties until about three weeks later. One night, my mom even called me at like 1 o’clock in the morning,” McDonald said.

Moore said her fiance is protective about her going out, and of everyone, he was the most affected. She said she doesn’t consider herself a “partier” and has not been to a party since the night of the incident.

Moore has an almost 2-year-old daughter and hopes that she never has to experience something like this.

“I got lucky, so I thank God every day. All I can do is pray about it,” Moore said. “If my baby goes to school where we live, I have no control over it. I’m just going to pray for her, and more so, the people around her.”

Two bones under Moore’s right elbow were shattered from the gunshot. She has endured therapy since.

In December, Moore visited the doctor because her arm was immobile. She recently underwent another surgery and still cannot move her arm without assistance.

“I can take my other arm and move it, but only about 90 degrees,” Moore said. “The doctors have high hopes for me, though.”

McDonald said he still has flashbacks from the party.

“One time, it was like three days later, I just wanted to relax and play video games, and I put in ‘Call of Duty’ or something,” he said. “There was one part where someone had to stab another person, and I just had to put it down.”

Others involved, like Wagner, have moved on with their lives, despite the events.

“I really haven’t changed much. I’m still the same person,” Wagner said. “I still sleep at night even though something like this happened to me.”

Danny Thomas Jr. said these are the situations, although tragic, that build stronger relationships.

“Your fraternity brothers and you have a bond like no other bond, especially the ones you pledge with,” he said. “Something like this brings everybody closer together. You lean on each other.”