After a full year of detours and road blocks, there is a light at the end of the tunnel as Wick Avenue is scheduled to reopen to the community in the upcoming months.

The project is on time with its expected completion date scheduled to be finished in the next month or so, he said. 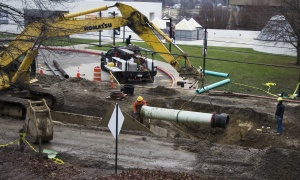 “When we did sort of the ceremonial ground-breaking September 15 of last year, we said it would take about a year to complete and I think we’re pretty much right on schedule for either a mid-September or beginning of October reopening,” McNally said.

Wick Avenue is in the final stages of construction with utility wiring currently going underground, he said.

“Once that work gets done, we can do the final course of asphalt and then reopen the roadway,” McNally said.

McNally believes everyone communicated well together and that it has been a successful project. He said the road work will move on to other locations such as Belmont and Fifth Avenue, so continued communication on alternate routes will be essential.

“Our staff has worked well with the construction folks, with [Youngstown State University] Parking and with the institutions on Wick Avenue to notify everybody of changes as construction moved up and down Wick Avenue,” McNally said. “I think the university community, employees, teachers, students [and] staff have been very understanding of things.”

Tyrone Peakes II, a YSU student voiced his frustrations of having to use detours to park and get around the road closing.

“Most of my classes are in DeBartolo so that hasn’t really affected me much, but over the summer coming [for] financial aid, I had to drive awhile to get to where I was going,” Peakes said. “I had a meeting … that I was actually late for because I was trying to find parking, so it’s kind of hard.” 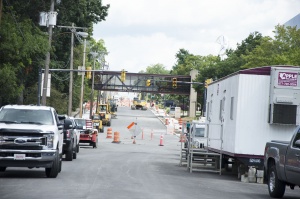 Rebecca Leonard, a YSU graduate student, said she uses the parking deck off of Fifth Avenue, so the construction has not affected her much.

“I’m lucky for that because it would be more difficult,” Leonard said. “I feel for people who have to drive that during the day.”

Charles Shasho, the deputy director of public works of Youngstown, said Fifth Avenue will be getting work done next.

“We have some funding in place for Fifth Avenue; that construction will probably have a water line portion of the project start next summer and then the roadway project will start in the spring of 2019,” Shasho said.

Traffic is expected to be maintained on Fifth Avenue during the construction, Shasho said.