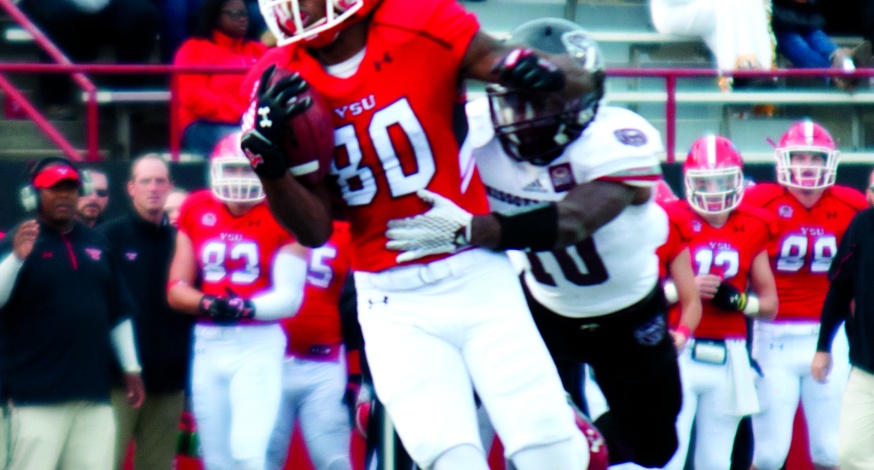 Several years ago college football was thrown into chaos as Division I Football Bowl Subdivision conferences tried to reconfigure in order to meet the requirements to create a conference championship game.

After a number of teams left their original conferences to join the Big Ten, Atlantic Coastal Conference and Big 12, the smaller conferences looked to fill holes left by some of their most successful teams.

The smaller conferences turned to the Football Championship Subdivision. They picked up some of the more-successful programs from the FCS to try to reinstate balance and stay competitive with other FBS conferences.

Since the ‘90s, the fans of the Youngstown State University football team had hopes the program would move from the FCS to the FBS. YSU considered a potential expansion team a couple times while YSU President Jim Tressel was the head coach, but the change was never made.

YSU Athletic Director Ron Strollo discussed why the Penguins’ football program is content on staying in the FCS and potential avenues YSU might explore if the a change was ever instated.

YSU flirted with the Mid-American Conference in the past, but Strollo said YSU is currently not interested in moving to the highest level of college football and is content staying in the FCS.

The University of Massachusetts temporarily joined the MAC but left the conference after the 2015 season. Now the conference is looking to add another team to its list of schools to replace UMASS.

Strollo said there were several key factors that play into the university’s decision to stay in the FCS. Travel, coaches and most importantly, finances. He said he wouldn’t rule out a move to the FBS in the future, but he said the university finances would more than likely prevent any moves, specifically FBS schools paying for the cost of attendance for their student athletes.

The MAC would be a perfect fit for the Penguins. The MAC currently has 12 teams; six of those teams are in Ohio. Geographically, the cost of travel would be a better fit than the Missouri Valley Football Conference, which stretches from Ohio to North and South Dakota.

When asked if YSU would be open to moving to another FBS conference other that the MAC, Strollo said if the program ever changed subdivisions, the MAC would be the leading candidate, but he wouldn’t rule out another conference that has schools near YSU.

“It’s hard to say. Obviously you look at geographies first, but the MAC’s membership hasn’t changed in quite a long time,” Strollo said. “They weren’t affected by all the conference changes that happened the past three or four years — they’re a pretty stable group. If that was something that we were interested in, which we are not, I’m not sure where the right fit would be for us.”

One factor that may get overlooked by most fans would be the cost to keep YSU’s current coaching staff. The university would have to increase the salaries for the current coaches.

In 2015, USA Today requested the salaries of DI football coaches. According to its report, on average MAC schools pay approximately $1.3 million for their coaching staffs. This includes the salaries of the head coach and the nine full-time assistant coaches at each university. Strollo said the Penguins would have to stay competitive with the payroll for the other teams in the FBS.

“You allow more coaches, and obviously the coaches you have are getting paid quite a bit more than what we are paying,” Strollo said. “Then you’re allowed 22 more scholarships and those schools are also giving the cost of attendance — which means the cost of each scholarship is probably 20 percent higher than ours.”

Strollo said YSU current football coaches took less money to join the program last season. “We began to address YSU’s structural budget deficit by requiring that each division of the University take steps to permanently reduce expense budgets.” He said the university wanted the coaching candidates to understand the current financial situation for the university before any contracts were signed.

“We’re spending 5 percent less on this current coaching staff than we did under Eric Wolford’s staff,” Strollo said. “It was in recognition of what was going on on-campus. So part of our discussion with every coach was ‘hey we’re facing tough economic times, and we need to do our part and give back.’ It was, hey, this is something that we’re gonna do before anyone was even offered the position.”

In a report issued to the YSU Board of Trustees on Sept. 8, Strollo and the Athletic Department concluded that a move to the MAC would require YSU to increase their current football expenses to $6,805,010, almost double the university’s current expenses.

Strollo said the FCS allows the YSU to generate more revenue. If YSU were to move to the FBS, the university’s budget would go into the red.

“You’re going to have to go out and compete for coaches at that level. So those would obviously be challenges,” Strollo said. “I think the real challenge when you look at that is although those schools are spending $3 million more than us, if you look at their ticket sales and corporate sponsorships, they’re not raising that much more than us—if not sometimes we’re raising more than them.”

Strollo said in addition to the $3,025,680 YSU would need to spend to reach the average expenses the MAC schools use on their football program, YSU would also have to pay a one-time entrance fee of “anywhere from $1 million to $5 million.”

Even though there aren’t any rumors of moving to Division II, it is still a good measuring stick to understand that any move could have a negative impact on YSU’s finances.

YSU has no interest in moving down, and one main reason is the perception the program would have in the eyes of the loge holders, the people who pay for season tickets and sit in the upper level of Stambaugh Stadium.

“The challenge with dropping down to Division II is how does that effect your income string,” Strollo said. “Right now, we’re getting half a million dollars from our loges holders. I’m going to be honest with you; I don’t think our loges holders would be interested in paying the rates that they pay for a Division II program.”

Strollo said factors like the number of scholarships, national recognition and the ‘guarantee game’, which is played early in the football season against a Power Five program, would negatively impact the university’s revenue.

“Some of the money that you would save by dropping — I think it’s 18 scholarships — you would probably lose that or more in revenue,” Strollo said. “You also won’t be able to play Ohio State [University] for $750,000. So between the loges and the ‘guarantee game’, and if you starting adding in if you go to Division II, is your signage worth the same amount? You start dropping down all those things because you’re not getting the TV recognition.

“Now all of our games are on ESPN 3, on a national network. Where you really would get burned is they’re really dealing with the same amount of coaches,” Strollo said. “Where your savings is going to be is the scholarships. Your revenue loss would be a lot more than the savings on the scholarships.”

According to the 2016 university operating budget, YSU athletics has seen 9 percent increase in revenue during 2015, most of the revenue was generated due to “guarantee payments for football and basketball.”

The YSU football team kicked off its 2015 season against the University of Pittsburg. YSU received $450,000 for participating in the game and putting Pittsburg on their schedule. Originally Ohio State University was supposed to start the season, but a change in the Big Ten’s scheduling policy forced Ohio State to take the Penguins off the schedule. If YSU had played the Buckeyes, YSU would have received $750,000.