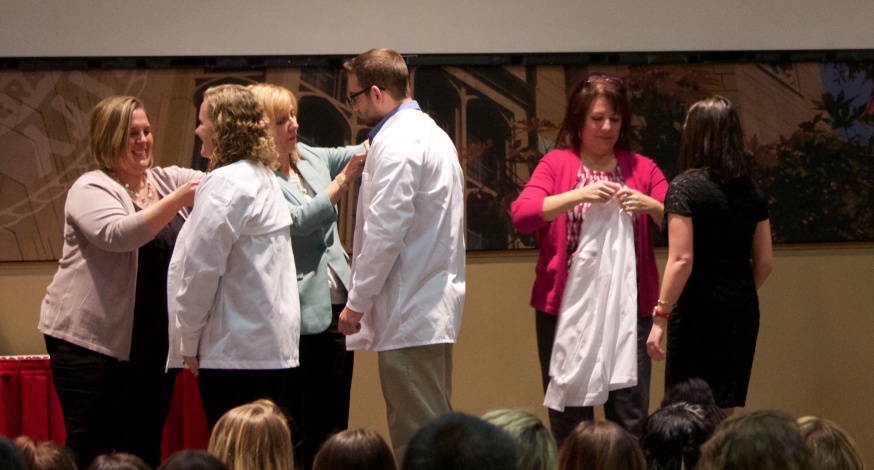 A white coat ceremony honors nursing students as they transition from their practical education to their clinicals — where they apply what they learn in the classroom in a hospital setting.

YSU President Jim Tressel introduced the event, focusing on the importance of nurses in our communities.

“My son, the pharmacist, always said that the people who ran the hospital are the nurses,” Tressel said. “The hospital runs and functions because of the nurses.”

Joseph Mosca, dean of the Bitonte College of Health and Human Services, said the ceremony brings well-deserved recognition to the nursing program and its students.

“It is a ceremony that promotes the concepts of excellence in clinical practice and a deep regard for human dignity that are two central components of YSU’s nursing program,” Mosca said.

Nancy Wagner, chair of the nursing department, said the students participating in the ceremony are about to begin their clinical experiences.

“This ceremony is meant to open their eyes to talk about caring, humanism and excellence in education,” Wagner said. “We thought it would be a good segue way to their clinical experiences.”

“Receiving your white coat is a symbol of being one step closer to completing your journey of being a nurse,” Aurilio said.

She said the students will begin to see the impact they have on patients’ lives, which will in turn have an impact on them.

“We selected Lisa because, as a member of the staff at Akron Children’s Hospital and because of her work with children, she would be able to represent that humanistic caring and excellence we want to instill in our students,” Wagner said.

Brandon Reyes, a sophomore in the nursing program, said participating in the ceremony was an honor. 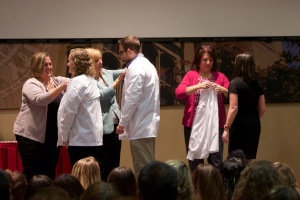 “Being the first class to do so really made the moment a lot more memorable,” Reyes said. “Hopefully, this tradition continues throughout the years, and more students lean towards the prestigious career of nursing.”

The nursing department received funding from the American Association of Colleges of Nursing in collaboration with the Arnold P. Gold Foundation to conduct the ceremony. YSU was one of 60 nursing programs nationally to receive funding initiating white coat ceremonies.

The Arnold P. Gold Foundation promotes a culture of respect, dignity and compassion for patients in the medical field.

Wagner said this is separate from the regular medallion ceremony performed when the students are seniors.

“This is a beginning rather than an ending,” Wagner said.

Wagner hopes the white coat ceremony will become an annual event. The funding they received was a onetime grant to fund the inaugural event, but the program will seek donations and other funding to support future ceremonies.