The Day in the Life of a Drag Queen

Drag queens, typically men who dress up as exaggerated versions of women for the purpose of entertainment, are taking Youngstown and Youngstown State University by storm.

Although the idea of a drag queen might be familiar to Youngstown natives, Joe Lemasters, a seasoned drag performer, explained his drag journey to allow people to gain a better understanding of the day in the life of a drag queen.

Lemasters, whose drag name is Mya Garrison, has been the host of the YSUnity drag show since 2017, but has been performing drag for seven years. He first got his start in drag when a friend bet him to perform at his college drag show during his freshman year at Muskingum University.

“Drag is very free. Very creative. For me, personally, it’s been something that allows me to express the creative side of myself that normally I wouldn’t be able to do and other forms,” he said.

Lemasters’ day job working in a hospital kitchen is the opposite of the glitz and glamour he experiences performing drag, and because of this he uses drag as a creative outlet.

In Lemasters’ experience, his friends have been supportive of his drag career, but he described his family’s involvement as “hit or miss.”

“It’s a little bit different for them, especially coming from a conservative area. They’re still trying to get used to the idea because they think it’s more of a sexual thing instead of entertainment thing,” he said.

Joshua Pietrowski, a friend of Lemasters who is also a member of the LGBTQ+ community, helps Lemasters with his costumes and performance ideas.

Pietrowski said he credits drag queens for the reason why the rest of the community can be “out.”

“I’m very supportive of it. I always have been,” he said. “[Drag queens] are the ones who [opened the door] for us.”

Lemasters described his drag persona as abrasive and “in your face” with a lot of attitude.

“She’s not afraid to hold anything back. [As Joe], I’m still in your face. I’ll tell you how it is, but I’m a little bit more reserved with it,” he said.

Recently, YSUnity has created an introduction to drag class series called “Drag 101” and “Drag 102” to teach potential drag queens how to “sashay away” on stage. “Drag 102” took place on March 21 in Kilcawley Center.

The goal of the classes are to get students comfortable enough to perform in a student show for the first time.

“My goal is to prepare as many people as I can for the show next month,” he said.

Carissa Brennan, a senior middle childhood education major and president of YSUnity, said she wanted to organize the class to show students how to do drag makeup, but because she doesn’t know how she recruited Lemaster to teach the class.

Brennan said people should be interested in drag because it’s really fun.

“It’s so cool to see a drag show, especially if you’re a [YSU] student for free,” she said.

Eddie Watral, a freshman social work major, attended the “Drag 102” class because as a member of the LGBTQ+ community, he wanted to support YSUnity.

Watral said he doesn’t know if he will perform in the student drag show, but is excited to support the group whether it’s on stage or in the audience. He encourages other students interested in drag to partake in the show as well.

“Never be afraid of, like, expressing yourself,” he said. “Whether it’s YSUnity, the drag show or the LGBT community as a whole, it’s so accepting and the most loving community you could honestly be a part of. You’ll be welcomed with open arms, so never be afraid.” 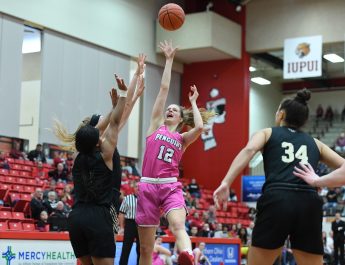