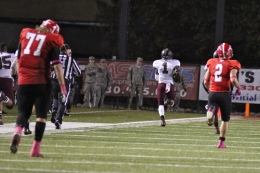 Anthony Thompson (1) picked off a pass by Kurt Hess and ran 100 yards into the end zone late in the fourth quarter against Youngstown State University on Saturday. Southern Illinois defeated the Penguins, 38-21. Photo by Dustin Livesay/The Jambar.

With Halloween right around the corner, the Youngstown State University football team experienced its own horrors on Saturday at Stambaugh Stadium.

To the tune of five turnovers and zero second half points, the Penguins were defeated for the third straight week, this time by Southern Illinois University, 38-21.

It started well for YSU, as Jamaine Cook put the Penguins ahead on their opening possession, finishing off the drive with a 1-yard TD run.

The senior running back then found the end zone from four yards out at the 11:43 mark of the second quarter to give YSU a 14-3 lead.

But before the Penguins could widen the margin, the Salukis blocked a YSU punt and recovered the ball in the end zone, driving the score to 14-10. This marked the third straight week SIU scored a touchdown off a blocked punt.

“It only takes a play here or there,” said defensive tackle Aronde Stanton. “One play can change the whole game.”

“Offensively in the first half, I felt like we were running the ball at will,” Cook said. “We were making plays. But in the second half, we just came out flat.”

The Salukis jumped ahead for the first time when SIU quarterback Kory Faulkner connected with MyCole Pruitt for a 34-yard TD late in the third quarter.

And though the SIU defense struggled in the first half, it pulled out a stronger performance in the second half. The Salukis forced YSU quarterback Kurt Hess into four turnovers, shutting-out the Penguins.

An interception by SIU cornerback D.J. Cameron was the first fourth quarter turnover, though it didn’t result in any points. However, the second turnover was costly for the Penguins.

With 9:14 left in the fourth, Hess fumbled the shotgun snap and the ball was kicked into the end zone. Tyler Williamson of the Salukis jumped on it for a 31-21 SIU lead.

The final two Hess turnovers proved to be fatal for YSU.

Threatening to cut into the 10-point deficit, Hess fumbled at the SIU 21-yard line with the ball once again recovered by the Salukis. And finally, a 100-yard interception TD by Anthony Thompson ended the junior quarterback’s frustrating day.

The loss marked the third straight week the Penguins were shutout in the final two quarters.

“We’re coming out flat in the second half and we may be getting a little complacent,” Cook said. “That’s something that the leaders and the coaches are going continue to focus on.”

Now with a record of 4-3 overall and 1-3 in the conference, YSU’s playoff hopes are suddenly in doubt. Still, Stanton said the team has to stay positive.

“We’re still in it,” Stanton said. “All of our goals are still out there.”