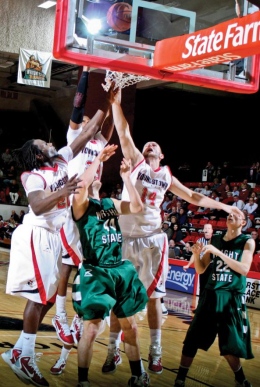 Members of the YSU men’s basketball team go up for a rebound in a game last season against Wright State University. Ashen Ward and DuShawn Brooks (pictured left and center) represent the lone seniors on the team this season. Photo by Nick Young/The Jambar.

Saturday’s game against Samford University ended with a 76-69 win for Youngstown State University.

The Penguins trailed late in the second half before gaining the lead. Jerry Slocum, head men’s basketball coach, said the team made halftime adjustments on the defense.

“[Samford is] a hard team to guard,” Slocum said. “In the first half, I don’t think that we had a possession defensively that I felt real comfortable with, and then, in the second half, I thought we kind of got a rhythm of what they do. I thought we did a really, really good job.”

“We just focused more on defense,” Perry said. “Our offense, throughout the whole night, we executed. We knew, in order to be successful, we had to get the stops that we needed.”

Slocum said the team played well and with great focus.

“I thought, as the game wore on, we got more comfortable,” Slocum said. “Overall, I was really pleased with our intensity. I was also really pleased with how we shared the basketball. To win on the road, you got to make sure to take care of the ball. I thought we guarded very well in the second half.”

The Penguins open home play on Tuesday night against Notre Dame College (1-0) in the first-ever meeting between the two schools.

“[There] are kinds of games in the past where we have not gotten prepared for that we should have mentally,” Slocum said. “[We need to] have respect for every game that we play, and we need to play well at home and take care of our own floor.”

Perry said the win over Samford is “only one game.”

“We can’t let one game dictate our season,” Perry said. “There’s a quote in our locker room that says, ‘We’re only as good as our next game.’ We have to go out there like we’re playing Butler [University].”

“The first game last year, I guess I tried to adjust to the college game, but now this year, and after the tremendous offseason we all had, I think that we’re all more focused this year [and] probably more in tune to getting that Horizon League championship,” he said.

Slocum said Perry is “as quick a kid with control that I’ve ever coached.”

“It’s not like a surprise to us because in our scrimmages, he’s been doing the exact same stuff,” Slocum said. “He just can play at a level speed-wise that’s hard for people to really prepare. All of a sudden, you think you’ve got him cornered, and then he just has such good anticipation and basketball IQ.”

Slocum added that Perry is not selfish.

“Not only did he score the ball well but probably got other guys … four to five, [maybe] six, baskets for us,” Slocum said. “A lot of times [it is] that second pass where he drives that kicks in.

He’s not only good in terms of his own abilities, but he also really raises the level and makes other guys better.”

The Penguins did not return from Samford until Sunday evening and have one day to prepare for Notre Dame.

It’s a tough week for the Penguins, Slocum said.

“We did everything that we could do [on Monday] in terms of getting back to some of those basics that we have to get back to,” Slocum said. “We’ll spend a lot of time on it on Wednesday, and we’ll do a little more [on Tuesday].”

Perry said the team might have only one or two days to prepare for some future games, particularly in conference play.

The Penguins play two of their 13 home games on Tuesday and Friday.

“When you only have 13 home games, every one of those suckers needs to be important,” he said. “I tried to tell that to our guys [on Monday] that we’re not like the bulk of the teams on our schedule that have 16 [to] 17 home games.”

Perry also said every home game is crucial, but he feels no added pressure.

“It’s important [and] it’s crucial that we seize every opportunity that we have at home and on the road, but more importantly at home,” Perry said. “It’s just coming in and doing what needs to be done. We’re not a team that’s going to make excuses for ourselves.”