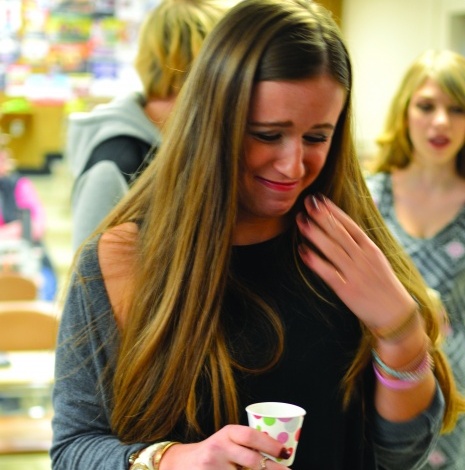 A bellowing, villainous laugh set the mood as a group of students consumed cupfuls of dried, dead crickets.

Kevin Bachhuber, founder of Big Cricket Farms — the first food-grade cricket farm in the United States — was the source of both the crickets and the laugh.

“Watching people eat bugs I give them has given me a chance to really work on my villain laugh,” Bachhuber said.

Colleen Clayton-Dippolito, a professor at Youngstown State University, invited Bachhuber to speak to her composition class on Thursday.

“It’s just an enriching thing. Some of the assignments I give [students] are writing about local things …[Big Cricket] is a success story in an area that isn’t exactly known for that. It’s innovative, it’s the first [food-grade cricket farm] in America and it’s right here in Youngstown,” Clayton-Dippolito said. “It’s special. … I think it’s important to think and write about local things.”

Bachhuber discussed the business of selling crickets, the practice of raising them and how his English degree helped equip him to convince consumers to eat bugs.

“I actually think [having a humanities degree] was a primary advantage in setting up the business. It’s one thing to set up a product, it’s another thing to have buyers — to understand what motivates people, and to reach out and engage and convince them that your product is something special,” Bachhuber said.

Time and experience eventually brought Bachhuber appreciation for his degree.

“If you’d have asked me 10 years ago, I wouldn’t have been so up on my English degree,” he said. “Now I really see its value.”

Though selling and eating crickets isn’t directly applicable to writing the perfect essay, Bachhuber argued the importance for students, regardless of their majors, to have a mastery of the language they intend to use for business.

For Bachhuber and his colleagues at Big Cricket Farms, overcoming the stigma surrounding insects — that they’re disgusting and should be avoided — and arguing they should, instead, be used for food was a primary challenge.

“There’s this thing — people kind of have it in America — where anyone that eats bugs is kind of weird, or a scientist or some nerdy dude or whatever, and when I come out and people see I’m a relatively normal person and we have the chance to connect face to face and see past those stigmas it really changes the dialog,” Bachhuber said.

Clayton-Dippolito used Bachhuber’s fight against the insects-as-food stigma to show her students the real world application of the structured arguments she teaches in class.

“Students can see a direct example of argumentation. An argument is not always two sides fighting with each other — it’s making a point,” Clayton-Dippolito said.

“One of the things I really love seeing is how these conversations play out on Facebook and stuff. People, when they order the bugs, they’ll tag our farm on their wall and I’ll see some of the comments their friends make saying ‘ew why would you eat crickets.’ And it’s fascinating because then you see the arguments you laid out a year ago being used by other people to defend eating crickets. It’s interesting to see that ownership,” Bachhuber said.

After discussing the marriage of business and narrative, Bacchuber and Clayton-Dippolito invited the class to try out cupfuls of Big Cricket Farms’ dried crickets as well as larger grasshoppers imported from Mexico.

Arielle Germanos, a nursing student in Clayton-Dippolito’s class, tried the crickets and was surprised by their flavor.