The Youngstown State University Foundation has reached its $100 million goal 18 months ahead of schedule, making it the most extensive fundraising campaign in the organization’s history, according to Heather Chunn, vice president of the YSU Foundation.

A $1.5 million donation from Eleanor Watanakunakorn will allow students to perform research in the biomedical field in the College of Science, Technology, Engineering and Mathematics for the YSU Summer Undergraduate Research Program.

The lab will also provide students with hands-on experience in their designated area of interest.

“We’ve received many wonderful gifts from very generous donors throughout the time we’ve been in the campaign since 2014,” she said.

“I’m excited to see the students in the lab,” Chunn said. “It’s going to bring a lot of interest to that area of study and help our students.”

Gary Walker, professor and chair of biological sciences, said in addition to state-funded dollars gifted to the lab a year and a half ago for renovations, Watanakunakorn’s donation will go toward a summer program for undergraduate research.

“We’re going to invite biomedically oriented students to do summer research on a variety of projects related to medical research,” Walker said.

The lab originated from a group of researchers within the biology department called the Proteomics/Genomics Research Group, which started with individual labs spread throughout the building.

Walker said when Martin Abraham was the dean of the STEM college, he moved the researchers to a location now known as the proteomics research group corridor.

“About a year and a half ago, we got state monies to totally redo the lab, so now we call it the research corridor, and that is going to be where this program is housed in the future,” Walker said.

Paul McFadden, president of the YSU Foundation, said the campaign will benefit students, teachers and classrooms and will ultimately “transform YSU.”

“It’s been successful beyond our wildest dreams,” McFadden said. “We reached our goal a year and a half earlier than our plan, although we’re going to continue the campaign.”

According to McFadden, the campaign has helped the university provide student scholarships and support faculty endowments.

“It’s been astounding how much it’s helped our campus,” McFadden said.

The campaign has raised $54 million for student scholarships, more than doubling the original goal of $20 million. A press conference is scheduled for Jan. 29 at 10 a.m. in Melnick Hall to chart the last 18 months for the campaign. Donations have reached a total of over $101 million as of Dec. 31, 2019. 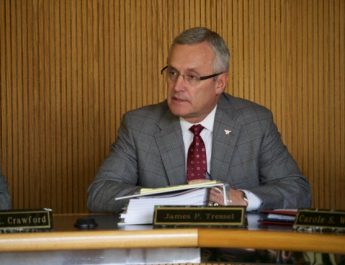