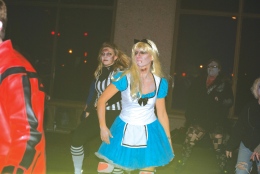 Youngstonians once again made the transformation from human to zombie on Saturday at the third annual Zombie Crawl.

Lyndsey Hughes, director of downtown events, has coordinated the event for the past three years.

“I got the idea from YouTube videos,” Hughes said. “I saw they did similar zombie crawls in cities such as Boston and LA, so why not bring the fun to Youngstown?”

Growls and snarls echoed in the streets as a herd of crawlers dressed like nurses, brides, grooms and Alice from “Alice in Wonderland” headed down West Federal Street, trying to create a scary atmosphere for bystanders.

Registration for the crawl began at 2 p.m. near the B&O Station and Oak Hill Cemetery. While participants waited to get their makeup done, they were treated to a free tour of the cemetery.

Participants were asked to donate a minimum of $1 to the Youngstown Neighborhood Development Corporation, and they were given a wristband for food and drink specials and rides on the zombie trolley throughout the evening.

Specials were offered by 11 downtown bars, including the new O’Donold’s Irish Pub.

Youngstown State University freshman Jenette Morell witnessed zombies participating in the “Thrill the World” dance at the beginning of the night.

“I think it’s pretty cool that they get such a good crowd for this each year,” Morell said. “The ‘Thriller’ dance seemed like a lot of work was put into organizing it.”

The “Thrill the World” dance provided entertainment for the crowd of zombies and bystanders as a select group of zombies performed the famous Michael Jackson “Thriller” dance.

Morrell also added that the Zombie Crawl is a great way for the community to come together.

“I think the community can really benefit from something like this,” Morell said, adding that she’d like to participate next year. “It brings a lot of different people together to experience something fun and different in our area.”

Hughes said the Zombie Crawl is “a great event that is really fun for the community.”

“It’s a good way to see the renovations of downtown and also see the new restaurants that have opened,” she said.

Hughes said she hopes to bring out families, as well as area adults and students. The Zombie Prom, which was held at the Calvin Center on Saturday, was geared toward the preteen/teenager demographic.

“We hope to reach out to both demographics,” Hughes said. “During the day, we try to have something for everyone. It really is a fun way for the community to see how well downtown Youngstown is cleaning up.”