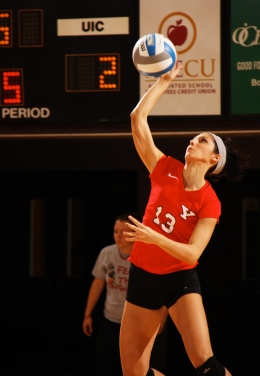 Sophomore Chelsea Guerrieri goes up for a serve in Saturday’s match. YSU picked up its first home win of the season against the University of Illinois at Chicago on Saturday. Photo by Dustin Livesay/The Jambar.

The Youngstown State University volleyball team (4-23) won its first home game of the season in five sets against the University of Illinois at Chicago (14-13) on Saturday after being swept in three sets by Valparaiso University (18-11) on Friday night.

“It feels good, but more importantly we got a big conference win,” she said. “We competed with them a little bit at their place, but we knew this is a team we can come out and match up well against.”

The Penguins came out strong, winning the first and second sets with 25-21 in each.

“I’m really excited,” she said. “We only had a few wins this season. Getting one at home and fighting for those last few points was really great.”

UIC battled back, winning the third and fourth sets with 25-20 in each, but the Penguins were too much for the Flames. YSU took the fifth set 16-14.

“Our defense really stepped it up,” Egler said. “We had really good passes, and we put the ball away. From a mental state, I think we knew we were going to beat this team and we stayed positive.”

YSU recovered from Friday’s loss against Valparaiso. Hundelt led the Penguins with 14 points, 13 of which were from kills and one point off a block. D’Ambrose led YSU with 31 of the team’s 33 assists.

The Crusaders held the Penguins to just 44 points, outscoring YSU by nine.

Burrows said she knew the Valpo game was going to be tough.

“I felt we played OK,” she said. “The first set we played pretty flat, but sets two and three were pretty good. … Valpo is just a really good team.”

YSU compiled 49 digs and 12 block attempts, with one point coming from a block.