The Vindys are continuing their span of shows to promote their recent vinyl release of their album “Keep Going,” with a show at the Birdfish Brewing Company in Columbiana tonight. “Keep Going” was originally released in April, but the band decided devolving to vinyl had its benefits for listeners.

Drummer Ed Davis said if people are going to buy the band’s music, they want to make sure it’s the highest quality possible.

“We recorded the album in a manner that would lend itself to vinyl,” Davis said.

Guitarist John Anthony said that, being huge fans of vinyl, he and the rest of the band have always had the idea of a vinyl release in the back of their minds. The group blends vocals, guitar solos and a rhythm section to create a genre lying somewhere between pop-rock and jazz.

The band sticks out amidst other local acts by their ability to fluctuate between these genres. 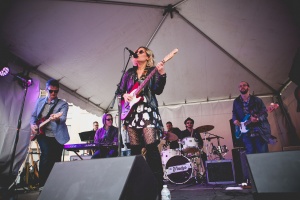 “Jackie has a very unique voice and is able to sound like a lot of different things,” Davis said. “We’re all capable of playing different styles, and we’re unique because we are hard to define.”

Popovec added she has no favorite song on the vinyl, which may be testament towards the quality of the album.

“If I didn’t like them all, I wouldn’t have put them on the vinyl.” Popovec said.

Anthony pointed out two songs he really liked, “Wrong with Me” and “Too Long.” He said these songs show the improvisational side of the Vindys, while Davis promoted their song “Save Me,” saying it showed their funkier side.

Popovec, Anthony and Davis formed the Vindys in 2013, and played their way through the ranks of Youngstown’s music scene, eventually becoming a headlining act in the area, as well as, other surrounding cities.

Along the way, the Vindys have experienced the advantages and disadvantages of being a Youngstown-based band.

“There are a number of amazing musicians in the area that are willing to share and create together, but venues are hard to come by,” Popovec said. “Though there has been a lot progress for venues in the last five years.”

Though there may be a lack of musical venues in Youngstown, Davis felt the venues have always been very supportive of the Vindys’ music and mission. Davis also felt a benefit of being from Youngstown is the proximity to other major cities like Akron, Cleveland and Pittsburgh.

With any dream, there may come a sacrifice, and the members of the Vindys have sacrificed their money and their time, but for them, these sacrifices are just a small price to pay.

“When you love making music so much, you don’t think of these things as sacrifices,” Davis said.

Following their show tonight, the Vindys next local show will be Friday, during the tree lighting ceremony in downtown Youngstown.