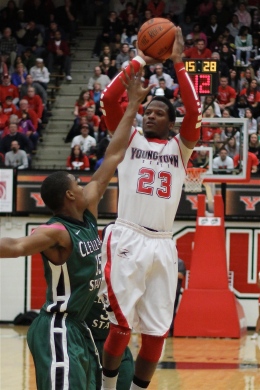 Youngstown State University senior DuShawn Brooks attempts a shot over freshman Anton Grady in a 67-47 loss against Cleveland State University. The Penguins shot 30.9 percent from the field and 16.7 beyond the 3-point line overall. Photo by Dustin Livesay/The Jambar.

“It was a disappointing effort on our part; we didn’t play well in any aspect or facet of the game,” YSU head coach Jerry Slocum said in the post-game press conference. “Give them credit, they had something to do with it, but we also self-inflicted.”

Slocum thought his team did a poor job handling the environment.

“I don’t think we handled the moment well,” Slocum said. “We did not do good things. They didn’t play us any different than they did the last time. The first time, I thought we handled it and made some good entry passes out of their trap and made them pay for it.”

CSU head coach Gary Waters said his team had a plan coming in and stuck with it.

“I thought the kids came out and followed the game plan,” Waters said. “We used an analogy, and it was about 20 pages long.”

The Vikings held YSU to a 4-24 shooting performance behind the arc, something Waters said was also in the game plan.

“At one point, we were the No. 1 defensive 3-point team in the country, and we had gotten away from that,” Waters said. “We came into this game, saying, ‘This is what we’re going to do so that we have a chance to win this game.'”

Slocum said CSU is a good team, but the Penguins hurt themselves as well.

“I thought the first time we played them we had more discipline,” Slocum said. “The last five or six times we played them, we have played them better at their place than we have here. We played outside of our basketball IQ.”

“I thought the freshmen were literally the difference in this game,” Waters said. “I thought they gave us a lift.”

Slocum said his team can’t get caught up in a loss like this.

“After we beat [the University of Wisconsin-Milwaukee on Jan. 20] and some of the other good wins we had, that didn’t make our year, and this isn’t breaking our year,” Slocum said. “This is one basketball game that we will put in our rearview mirror real quick.”

Slocum added that the Penguins are focused on the next three games, all on the road. They face Milwaukee, the University of Illinois at Chicago and Loyola University Chicago.