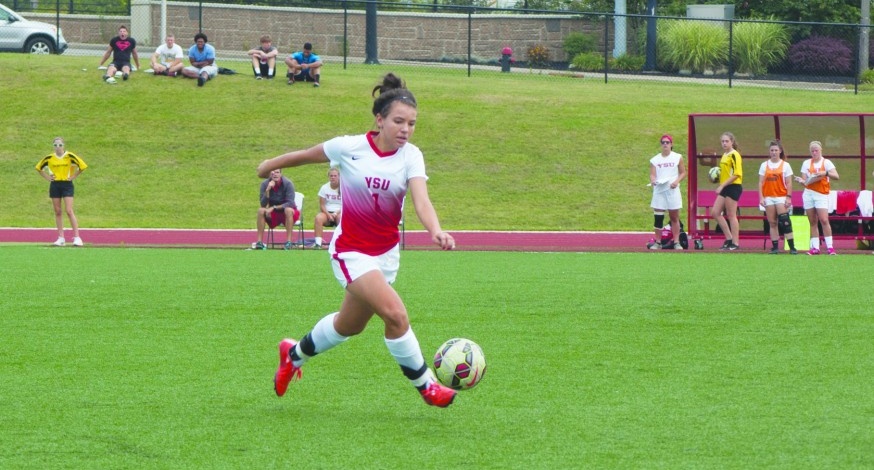 The Youngstown State University soccer team has been competitive this season, but the Penguins suffered their worst loss since 2009 on Saturday.

The scoring began 24 minutes into the first half, when Valpo [3-3-3, 1-0-1 Horizon League] junior forward April Cronin converted on a shot attempt for an unassisted goal, her fifth this season. Ten minutes later, freshman forward Cory Griffith scored her first goal of the contest, sophomore defender Sydney Gountounas was credited with the assist. Valpo took a 2-0 at halftime.

During the 56th minute in the second half, Griffith found the net again from an assist by fellow sophomore defender Grace Rogers to increase the lead to 3-0. Two minutes later, junior midfielder Michelle Mottonen’s first goal of the year, assisted by senior midfielder Rita Craven, extended the lead to 4-0.

Late in the second half, junior defender Shelby Oelschlager scored her first goal of the year on a free kick on an assist from redshirt freshman Jordon Tindell to give Valpo a 5-0 lead.

Unfortunately, things went from bad to worse after YSU gave the Crusaders another goal after they scored in their own goal with 3:52 left in the match, giving Valpo a 6-0 lead.

Valpo outshot YSU [5-6, 0-2 Horizon League] by a 20-4 margin. Oelschlager and sophomore Morgan Manzke led with three shot attempts each, 10 of Valpo’s shots were on goal.

Elizabeth Balgoyen recorded four saves during her seventh start of the season.

YSU junior midfielder Kathy Baquero was sent off the field with about a minute remaining in the first half after receiving her second yellow card of the match. Baquero will be suspended from Wednesday night’s contest at Cleveland State University.

“It’s about as frustrating as it can be,” Lemke said. “It’s the worst defeat we’ve ever taken at home, and it ties the worst defeat we’ve ever had here. It was rough having to play a person down, but we have to worry about the things that we can control and the things that we can manage. I don’t think even in the first half that we did a good job of that.”

Next on the schedule is Cleveland State University [5-4-1, 1-0 Horizon League]. The Penguins are 2-1 on the road this season and will play their first road game since Aug. 28.

Lemke discussed the team’s upcoming match against the Vikings and what YSU has to do to leave Cleveland with the win.