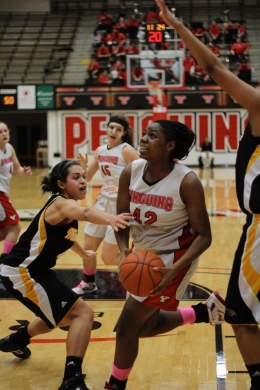 Junior Brandi Brown drives to the lane on Thursday night against the University of Wisconsin-Milwaukee. Brown scored 20 points and collected nine rebounds in a losing effort, 76-71. Photo by Dustin Livesay/The Jambar.

The Penguins had an 11-point lead at halftime and 20 total points from junior forward Brandi Brown; sounds like a good night for the Youngstown State University women’s basketball team.

Twenty-two fouls and 26 second-half points do not.

That’s the tale of Thursday night’s game against the University of Wisconsin-Milwaukee. The Penguins lost, 76-71.

YSU scored a season high 45 first half points. But its 26 second-half points was the lowest scored against a Horizon League team this season.

“I thought it made us a little more tentative,” said YSU head coach Bob Boldon in the post-game press conference, regarding the fouls. “But our kids have played with fouls. We just had a hard time guarding in the second half.”

Fouls were called left and right — many, off the ball fouls. Boldon’s frustration was visible within the first couple minutes of the game when he tossed his suit jacket.

Sophomore Liz Hornberger said in the postgame press conference that the refs are not to blame; it’s the team.

“Calls aren’t going to go your way, but you can’t blame them,” Hornberger said. “We didn’t guard the post well, we didn’t take certain things away in the second half, we came out flat, and that’s why we lost the game.”

The teams traded baskets, but with under four minutes left to play, the Panthers hit four field goals (two 3-point field goals) resulting in an 11-6 run to end the game.

“We hardly had any stops and certainly didn’t get any important ones,” Boldon said.

“It isn’t anything we don’t know. We have a hard time controlling it.”

Brown led all scorers with her 20-point effort and nine rebounds. Hornberger finished with 12 points and sophomore Melissa Thompson scored 10.

Hornberger said she’s upset with everybody on the team, including herself.

“We came out flat, and being up 11 points, our team’s not good enough to run away with that,” she said.

“Probably that or the first time we lost to them; you can pick,” Boldon said.

The Panthers defeated the Penguins on Jan. 21, 76-68. Two of their three conference victories came against YSU.

Thursday was the first home game for the Penguins since the 65-63 Feb. 4 loss to Butler University.

YSU will be on the road for another three games following Saturday’s matchup with the University of Wisconsin-Green Bay who rank ninth in the nation.

But Boldon and Hornberger said the team is as tired as anybody else in the league, and they are not going to use that as an excuse.

“I think mentally sometimes we get tired, and we’re not willing to fight through, and that’s what kind of killed us tonight,” Hornberger said.