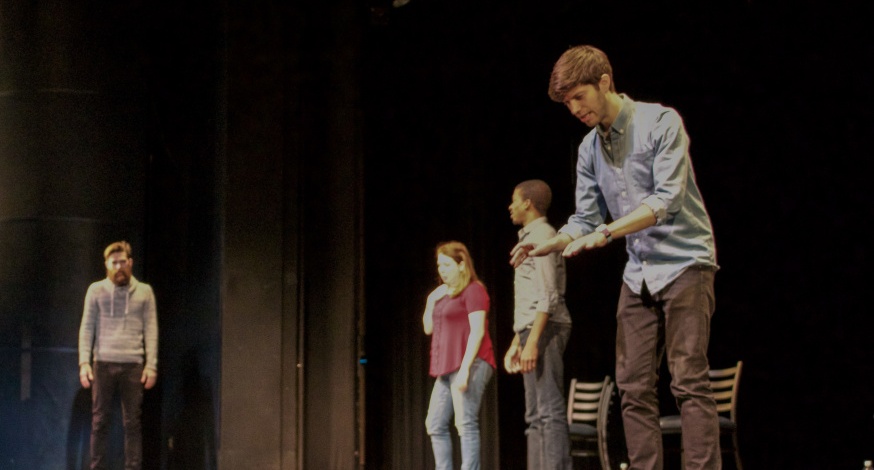 Akron comedian James III leaned over to an imaginary bowling ball return, picked up an invisible bowling ball and sauntered over to a theoretical bowling lane that stretched from the stage into the audience.

He brought the ball to his chest and shot a seductive glance at troupe mates Matthew Starr and Caitlin Puckett as they fanned themselves. James lined up his shot and rolled the ball. He nods approvingly at his shot, but Timmy Wood, James’s third troupe mate, states that he missed every pin.

The crowd bursts into laughter.

Upright Citizens Brigade, the New York and Los Angeles-based improvisational comedy troupe, performed at the Ford Theater in Bliss Hall on the evening of Jan. 14.

The snippet of described scene was taken from a one-sentence text message that was read from the audience, stating that bowling is the antithesis of masculinity. Starr and Puckett played a couple of hot-and-bothered women in a bowling alley, observing James and Woods as they bowl.

Improv comedy is a stage performance that generally begins from word, sentence or idea. From a single subject, the performers play out a scene that is not scripted and will never be depicted again.

“You always want to keep it original,” Wood said.

“Whereas, with standup you do a lot of open mics and you spend a lot of time traveling,” Starr said. “Here, like, you still travel, but you mostly just work and hone your five minutes, rather than creating new things with other people on stage.”

Some of the methods used for gathering ideas for the evening’s performance were out-of-context text messages, strange recent experiences and unique people or stories at Youngstown State University.

Starr described the general philosophy of improv comedy as a single phrase: “yes, and.” The idea is that the performers do not say no to an idea, because it is immediately established. Saying no to an idea would slow the pacing of the performance.

“Those little, happy accidents are almost better than if I were to get it right,” Wood said.

“Some of my favorite moments are the mistakes,” Puckett said.

A few of the skits acted out ranged from YSU’s rock painted with ISIS sentiments and a ghost that haunts Buechner Hall, to “Bar Rescue” visiting Youngstown.

All of these examples were pooled from the audience.

“That’s part of the joy of improv, because the audience is with you as you’re making it up,” Wood said. “It has this, like, tight rope act aspect to it — that we can fail at any point. The fact that we’re making it up as we go I think elevates all the material. If we were to stage that, it would be funny, I’m sure, but not quite as exciting as seeing it happen in the moment.”

“That’s actually one of my favorite things,” Puckett said. “Yeah, I want to be committed to a character and stay in the scene, but it’s very important for me to find my teammates funny, and that’s one of the greatest things about it.”

The UCB touring company has 12 people working, going out in groups of four for each performance. It is made up of improvisers, actors and writers that are involved in the comedy community.

To be placed in a theater or on the Tour Co., people enroll in UCB’s training center.

UCB’s stop in Youngstown was part of Wood’s final tour in the Tour Co. The four said that they plan to continue to hone and perform comedy back in New York City.