Youngstown State University’s University Theater presents the musical, “A Funny Thing Happened on the Way to the Forum.” 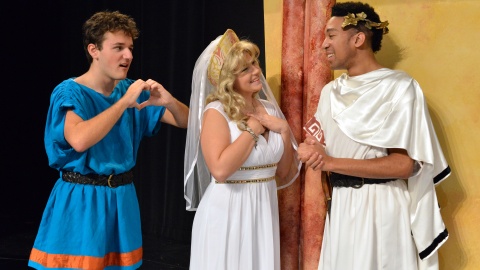 “A Funny Thing Happened on the Way to the Forum” is about Pseudolus, who is a Roman slave owned by Hero, who seeks to win freedom by helping Hero win the heart of Philia. The cast consists of Pseudolus played by Ben Mowrer, Philia played by Gabby Martin and Hero played by Stefon Funderburke.

The cast has spent many hours in and out of rehearsal preparing for their roles. Funderburke spent his time toning his body to make sure he fit the look of Hero, where Martin spent her time preparing for the music.

“I needed to work on my breath support for the music,” Martin said. “The music in this show is difficult to sing, so it took a lot of work outside of rehearsal to perfect it.”

The cast had to make some lifestyle changes to be prepared for the show. Many factors play a part in the way an actor performs onstage from what food they eat to how much they use their voice.

“Preparing for the show changed my daily lifestyle. I have to be taking care of my voice constantly,” Funderburke said. “If I eat too much dairy, it causes a buildup of phlegm, and that makes it harder to sing. I have to be careful not to overuse my voice and make sure my voice is well rested, so I can sing my best.”

Along with personally preparing for their roles onstage, rehearsal is spent mastering the challenging music composed by Stephen Sondheim.

“The music in the show is all composed by Stephen Sondheim, a very famous musical theater icon,” Funderburke said. “The music is not only challenging and unusual vocally, but it is complicated and difficult to act as well. Most music is either hard to sing or hard to act, and this music is both.”

One of the hardest struggles of playing a part in a show is adapting the character. The cast has had to try to become the role they are playing even when the character doesn’t directly relate to their personality.

“Philia as a character is very ditzy and not very smart. She and I are not alike in most aspects; I had to change my mindset to capture what Philia thinks,” Martin said. “It is difficult to play a role that is so different from my personality, but that is what separates good actors from great ones is being able to embody a character so different from yourself. It has been a challenge for sure.”

According to Mowrer, people should come ready to laugh so hard their sides will hurt. All of the cast’s efforts have been in making the show as hilarious as possible, and they want to hear as much laughter as possible.