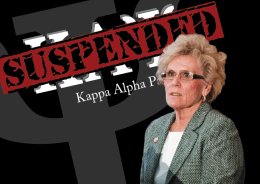 The Jambar reported on Tuesday that a YSU student was beaten and taken to St. Elizabeth’s Health Center in Youngstown. The student remained in critical condition for most of the weekend and was released from the hospital Wednesday.

Anderson called the case “outrageous, unconscionable and against the very fabric of everything that Youngstown State University stands for.”

Police are conducting an investigation into the beating.

“We have been and we are in the process of conducting an internal investigation that could lead to the permanent revocation of [Kappa Alpha Psi’s] charter on this YSU campus,” Anderson said.

The fraternity was suspended under the YSU Code of Student Rights, Responsibilities and Conduct, which — along with state law — prohibits hazing.

Anderson said additional actions might be taken against any individual associated with hazing practices.

The decision to suspend the fraternity was made on what Anderson called “enough information” that provoked the university to take action.

“It was our responsibility. It was our obligation,” Anderson said.

She said the incident “reflects badly on the many student organizations that are working positively on behalf of the university, the community and their members.”

She added that this incident is not indicative of behavior practiced in YSU’s Greek system.

Six of the 9 YSU fraternities denied the hazing allegations when contacted on Monday.

“Any campus student organization or student participating in any activity that threatens the safety of the members of the YSU community will be dealt with promptly and severely,” Anderson said.