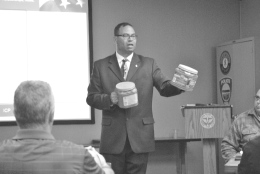 On Wednesday, Steve Gahagans, chief of police for the University of Arkansas in Fayetteville, demonstrates the importance of limited resources during a critical incident by using coffee cans to represent safe drinking water. Photo by Kacy Standohar/The Jambar.

About 30 staff members from various campus and off-campus departments spent the past three days preparing for the worst.

Youngstown 911, the Youngstown Fire Department, the State Highway Patrol, the Mahoning County Sheriff’s Department and the FBI were among those represented at the training classes.

“Just about every major organization on and off campus is here to respond to a critical incident or disaster,” said Mike Cretella, deputy chief of the YSU Police Department.

The classes, funded by the U.S. Department of Homeland Security and the Federal Emergency Management Agency, took place from 8 a.m. to 5 p.m.

Tuesday through Thursday. It was the first time that the class had been hosted at YSU.

“We’ll all know what each of us expects from one another,” Cretella said. “It’s good to see them periodically for contact information.”

Eric Plummer, system chief of police at Southern Arkansas University, has taught 14 courses at various universities across the country, and he said the group has been analyzing previous case studies.

Plummer said it is important to use resources effectively in case of a disaster on campus.

“Universities are like cities in themselves, and, much of the time, we have to be self-sufficient,” Plummer said. “What happens is that we can’t rely on the city’s response, because if we have a critical incident on our campus, it’s typically going to affect the city in which we reside anyway. The city will have their resources tied up.”

Plummer also said other university officials directly involved with the students need to be informed and aware.

“We need to work with resident assistants and directors in case we ever need to evacuate,” he said. “It is important they understand what incident command system is.”

Plummer said the most known incidents are earthquakes, fires, tornadoes, suicides, deaths and campus shootings. But they all carry the same weight, and they all require preparation.

Addressing an incident with a faster and more efficient response could reduce the amount of days the university would need to cancel classes.