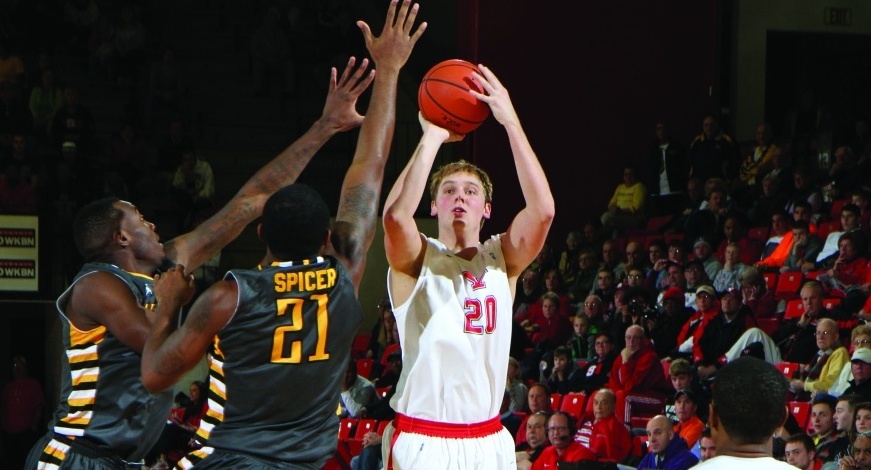 This year’s Youngstown State University men’s basketball team will have a completely different look than a year  ago. YSU is returning only four players who appeared in game action a season ago, and will have to replace four of their top five scorers.

The changes, however, may be welcomed after a more than disappointing season a year ago. The Penguins finished 11-21 and only managed a 2-14 record in the Horizon League play.

Head coach Jerry Slocum’s major overhaul of the roster gives the Penguins a considerable amount of size at every position this year. Senior Bobby Hain was the only true big man on the roster last season, but this year the Penguins have five players listed at 6-foot-7 with multiple players being able to play the center position.

“We’re in uncharted territories around here. There will be times on the floor when we have a 7-footer, a 6-foot-11, a 6-foot-8 guy,” Slocum said. “We’ve never been able to do that.”

The size has led for Hain, who was primarily a center last year, to make the permanent switch to power-forward this year. Hain averaged 15.6 points and 7.4 rebounds per game and was named to the All-Horizon League second team as a center this year.

“I think it’s great for me. I get to have those bigger guys down low, but I’m not also guarding 7-footers night in and night out and trying to beat each other up,” Hain said. “But also I can use my skill and my outside shooting to my advantage.”

Sidney Umude, a 6-foot-7 sophomore, has taken on the starting center role, while 7-footer Jorden Kaufman also is expected to play a large role at the position and could push for playing time. Umude took over the center role during the Penguins’ foreign tour in the Bahamas this August where Umude started all three games. He averaged 3.3 points per game and played in 22 games last year.

“It’s a change, but over the summer I’ve worked a lot on getting stronger and just doing my footwork in the post because Coach thought I was doing real well down there in the summer,” Umude said. “It’s a big change for me moving down from forward to center, but I’m still going to step out and shoot some jumpers.”

The foreign tour gave the Penguins a chance to get their young and inexperienced team some action before the start of the season. The Penguins competed in three games against international opponents, finishing 2-1. It also gave the Penguins 10 additional practices.

Coach Slocum was particularly impressed with the growth of his backcourt during the tour. Newcomer Francisco Santiago started at point guard, and sophomore Cameron Morse started at shooting guard in the Bahamas. Morse averaged six points per game last season, but only appeared in 17 games.

“Of anything that came out of that tournament positively was that our backcourt’s pretty good. Our two point guards really performed well down there,” Slocum said. “I’m not going to say that it wasn’t a learning curve, but those guys are pretty confident guys, and they’re guys I have a lot of confidence in.”

The Penguins tip off their season at Kent State University on Nov. 14, who they lost to last year’s opening game 69-61.

“I can’t wait. I can not wait until Nov. 14 to step out on the court again,” Kaufman said.