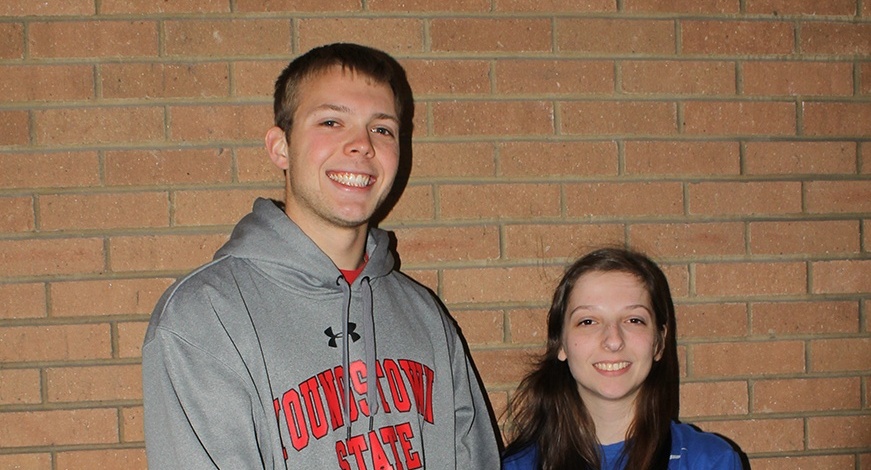 Youngstown State University students Andrew Morgan and Jenna Wise were named Goldwater Scholars for the 2016-17 year. This marks the first time that two YSU students are recognized in the same year.

Seven YSU students have received the Goldwater scholarship since its inception in 1986. Morgan and Wise were chosen from 1,150 mathematics science and engineering students from 415 colleges and universities. They were among 252 students who received the award nationally. 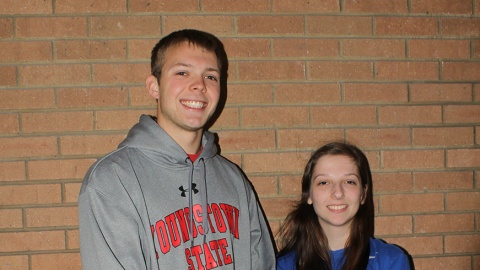 Morgan, who double majors in electrical engineering and computer science, said the scholarship is based off of research. In order to apply, students had to detail their research in a two-page essay.

“They want you to highlight a problem in your field of research, and what you would do to help solve it,” Morgan said.

Wise, who double majors in mathematics and computer science, wrote about eye-tracking research she has been working on with Bonita Sharif, assistant professor of the department of computer science and information systems.

They use a device attached to computer screens to collect data on user’s eye movements. She said the purpose is to find ways the data can help programmers solve problems.

“The whole idea behind that is they want … [to] be able to see where they’re looking and determine if how they’re teaching programming is the right way to teach it,” Wise said.

Morgan focused his application essay on his 3-D printing research. He is a teaching assistant for a first-year engineering class, so students participate in the research.

“[Project based learning] is something they promote in engineering,” Morgan said. “So we’re doing this, but then we’re enhancing it by using 3-D printing, and we’re assessing whether or not those effects benefit students.”

Wise said Tom Wakefield, associate professor of mathematics and statistics, encouraged her to apply for the Goldwater Scholarship, and she wouldn’t have done it otherwise.

Wakefield was tasked with recruiting Goldwater applicants this year, and he thought of Wise and Morgan because of their interest in research. He said the awards are a real honor.

“I think it’s a true testament to their ability as researchers and the undergraduate research they have conducted, but also their potential to make an impact in their fields in the future,” Wakefield said.

The applicants were notified by SGA President Ashley Orr that they won; she congratulated both of them on their achievement. Morgan said he was happy. Wise said she had to check the website repeatedly to make sure she won.

“It’s still hard to believe now that I’m a Goldwater Scholar,” Wise said. “Andy and I will do our best to live up to everyone’s expectations.”

Wise said she wants to pursue a Ph.D. in either computer science or math, and the scholarship will help her stand out. She also said it provides financial help.

“I don’t have to work as much, and I can focus more on the research that I’m doing now instead of other things, worrying about money and stuff like that,” Wise said.

Morgan plans to pursue a Ph.D. in computer engineering with a focus on robotics and artificial intelligence.

“I really enjoy combining those two into something that we can see more applicable in our everyday society,” Morgan said. “Even in our Department of Defense, military-type applications.”

Wise said she hopes this achievement can show YSU students that they are just as capable of winning prestigious scholarships as Ivy League students.

“I’m hoping … this sets more of a pathway for other students. There are so many students I know that could have applied and won it as well,” Wise said. “I hope this helps push more people to apply because I think most of our YSU students are highly qualified enough to win this award.”

Morgan talked about the importance of Orr winning the Rhodes Scholarship earlier this semester and having two Goldwater Scholars in one year for the first time.