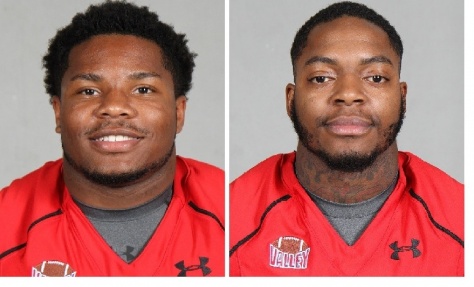 By Justin Wier and Dan Hiner

Two Youngstown State University football players were charged with improper handling of a firearm in a motor vehicle after an officer heard shots fired near the Wick Avenue parking deck early Sunday morning.

The officer was parked in the Wick Avenue parking deck when he heard three gunshots. He approached three men outside the University Courtyard apartments who drove by while laughing. According to the report, Mitchell, Wright and a third passenger denied hearing or firing the shots, but told the officer they had a gun in their trunk.

The officer recovered the pistol, a magazine with a spent casing and a box of .380. Two other spent casings were found at the corner of Wick and Lincoln Avenues.

In addition to the improper handling of a firearm charge, Mitchell was also charged with discharging a firearm from a motor vehicle.

Sports Information Director Trevor Parks said both players have been suspended from the team.

YSU represented a second chance for Wright, who transferred to the university after being discharged from Appalachian State University’s football team in August of 2014 for possessing marijuana.

The weekend’s events follow an incident in February, when Eric Thompson was charged with assault following a fight at the Tau Kappa Epsilon fraternity. A fourth football player was named in a police report detailing an assault at the Alpha Phi Delta fraternity the same night. The detective assigned to the case said in Februrary that charges were not filed in that instance, because the victim did not cooperate with investigators.

The police report also stated that shots were fired from an automobile following the assault at Alpha Phi Delta.

Parks said it’s difficult to keep tabs on players during the summer, but they will determine whether further action needs to be taken during the academic year.