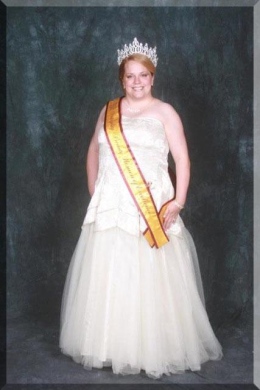 Freshman Roberta Cykon poses in her pageant wear. She isn’t involved in pageantry, but uses it as a fun way to symbolize inner beauty in her Integrity Beauty Women of Excellence group. Photo Courtesy of Roberta Cykon.

In 2005, Roberta Cykon looked into her dying grandmother’s eyes for one last time. At just 32 years old, she began thinking about her own last moments on earth and whether anyone would be there with her.

A request gave her a way to connect with these residents.

“Before my grandmother died, she asked me to keep coming back, and I’ve been visiting ever since,” Cykon said.

She began visiting residents within a week of her grandmother dying from a long battle with brain and lung cancer.

Cykon began building relationships with the residents and their families. One of the women she visited was Helen Lucille Albert.

“I never expected this visit to change my life forever,” Cykon said.

She said Albert instilled values that she had never gotten as a young woman. Cykon said Albert helped her realize she could take the pain and anger of her past and turn it into purpose. She also taught her the importance of helping others — even if it’s something as little as picking up someone’s dropped pen.

They both shared a passion for changing the world through the love of God. But it wasn’t long before Cykon would lose another loved one. Albert died in September 2009.

Albert did, however, live long enough to see Cykon establish the Integrity Beauty Women of Excellence program in her honor.

The idea behind the program is for women to share their stories with hopes of inspiring others and helping women see their own inner beauty shine. As a fun way to symbolize inner beauty, they wear pageant-style crowns and sashes.

Cykon said she relates to young women who may be going through tough times. She spent her teens in children services, and also went through a phase of promiscuity and self-mutilation. Cykon said she felt like she had no purpose.

The group has allowed her to share her story locally and connect with younger women in need of a mentor.

Tiara Magazine, a beauty pageant magazine, received and published a story Cykon wrote about her interactions with Albert. In September, the magazine named Cykon the 2012 Inspiring Woman of the Year.

“This was a total honor and was not expected at all,” Cykon said.

Since enrolling at Youngstown State University in the fall of 2011, she has been trying to start a campus group with similar intentions but still needs to find an adviser.

Cykon said wearing the pageant attire wouldn’t be mandatory, and men would be welcome as well.

“I want to give people an opportunity to talk about their stories and help others see that you are worthwhile and valuable where you are right now. When I was younger, I never realized that. So, I want to turn pain into purpose,” Cykon said.

Heather Tabor, a freshman special education and art education major, said she met Cykon in one of their first classes together.

Another student was bullying Cykon when Tabor started sticking up for her and began sitting with her. Tabor said she would like to see this group start on campus.

“Everyone is beautiful in their own way. Especially ones who get picked on,” Tabor said.

She said meeting Cykon has been a blessing because it’s nice having someone to look up to on campus.

Becca Ball is another YSU student who would like to see Cykon’s campus group take off.

Ball met Cykon when Cykon sat in the wrong classroom and asked her for a pen.

“We started just talking about our majors, and we got to be really close,” Ball said. “She is definitely a mother figure. She calls me her baby.”

Ball said they try to meet at least once a week for lunch and would like to see the campus group become a reality.

“We all have something that we can learn from someone else’s story,” Ball said.

And Cykon hopes to share that story with as many people as she can.

“I just try to treat others how I would like to be treated. When I was younger, I didn’t have a mentor,” Czkon said. “I just want everyone to have a place where they can speak openly and without judgment.”