As Youngstown State University President Jim Tressel drove down the streets of YSU in his buggy, students and staff waved and honked.

The university president offered rides to those walking on the sidewalk, who expressed excitement to be in the golf cart Tressel uses to drive students around campus.

He said he took a YSU alumni on a tour of campus two years ago and the alum told him although the golf cart was fine, he needed something for himself.

In August 2015, the Strimbu Memorial Fund board members donated the YSU-themed John Deere Gator to Tressel so he could give tours of campus to prospective students and supporters. 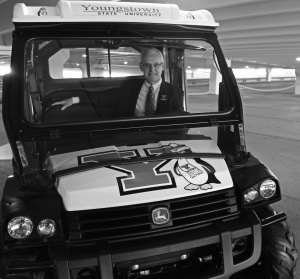 Tressel said he likes to give rides to students because it is beneficial to meet people on campus and save them a few minutes. He said he is used to working with students in all parts of their lives from football to their academic careers.

“The more kids you meet, the better. The best part of my job is the students, the adults wear me out,” he said. “You just get to talk to students about their lives, majors and where they’re from,” he said.

It makes students know they are appreciated, Tressel said.

“The coolest thing was when someone with crutches was [going] to the cathedral and I gave him a ride there,” he said.

Additionally, Tressel gave a ride to a girl and her father one day because they looked lost and could not find where they parked.

“The girl was a swimming recruit and ended up signing here,” he said.

According to Tressel, he has the most fun driving around campus when his buggy is full and there are students sitting in the back.

“When it’s completely full, I scare them a bit and go fast,” Tressel said.

He said sometimes people give him weird looks because they may not know who he is.

Tressel said he gets his “customers” mostly at the Courtyards and he catches students taking photos while he is driving them.

Jacob Stellers, a YSU student, was taken to the Cafaro House in Tressel’s buggy. He said it was convenient that he did not have to walk home from the library after taking three exams.

Christopher McComas, a geography major at YSU, was given a ride to the Cafaro House and Tressel asked him how his grades are.

“I think it is really cool to have a president that is personable,” McComas said.

Siwani Neupane, Yogesh Gautam and Sandesh Neupane, international students from Nepal, were picked up by Tressel as well. Sandesh Neupane said they were happy Tressel took them home because it saved them the walk.

“It is very kind of him to do this,” Sandesh Neupane said.

Tressel said in the winter he puts the doors on his buggy and he enjoys keeping people warm.

“I probably give less rides in the winter, but it’s more appreciated when students are freezing,” he said.

One thought on “Tressel’s Drive to Help Students”