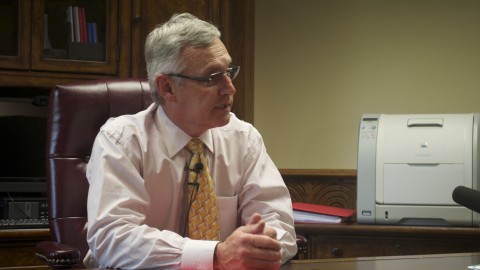 The Division of University Advancement previously included the development office, but that no longer exists because of an agreement that put the YSU Foundation in charge of fundraising and development efforts for the entire university.

Tressel said the changes were prompted by a significant amount of turnover within the administration — which provided opportunities for reorganization — paired with a desire to address budget constraints.

“We sat down and strategically figured out what was needed and who might be able to handle those tasks,” Tressel said.

Tressel said the cuts will result in certain people taking on more duties and responsibilities than they had previously.

The changes were approved by the YSU Board of Trustees’ university affairs committee.

Tressel said he hoped the new structure would meet the needs that were being met previously.

“You can only afford what you can afford. Until we grow our student attraction higher and do a better job of retaining students, hopefully [then] we can rebuild our ranks,” Tressel said.

He said cuts have affected not only the administration, but also faculty and staff. People have left the university, and funds have not been available to fill all of those vacancies with new hires.

The administration made an effort to ensure the things they wanted to focus on were being addressed. A press release identified creating a culture of community on campus, ensuring the success of all students, developing programs and activities that impact the region and promoting a campus environment that provides for the discovery of knowledge as major areas of focus.

Tressel said he is confident they will be able to accomplish these goals.

“I’m excited. We have an extremely hardworking group that is more than willing to take on these duties,” Tressel said.