The B&O Station, built in 1905 in the heart of Youngstown, has evolved tremendously over the years. What started as a train station for the B&O Railroad now serves as an event hall.

Sandi Cassile, the B&O Station owner’s daughter, said her father bought the station in 2001. She said they started as a restaurant, but it only lasted a few years.

“It was ahead of our time, so we were dishing out a lot of money,” Cassile said. “Just the overhead, utilities and payroll was insane.”

Cassile said the station was re-vamped and turned into a venue. She said they have hosted fundraisers, art shows, concerts and weddings.

“Everyone we spoke to always said they’d love to get married here, this is such a good venue,” Cassile said. “It’s one of the prettiest places in Youngstown.”

Cassile said the station’s renovations include a bar that was built with a brewery, a new staircase with iron cut into the shape of a locomotive that was done by a friend of the owner and all of the woodwork. She said new kitchen equipment has been installed as well.

Cassile said the station is looking into leasing the kitchen out in the near future. She said Youngstown has its history and nostalgia because people are still stuck in their ways.

“That’s something that people like around here,” Cassile said. “The fact that this is still standing 113 years later is huge.” 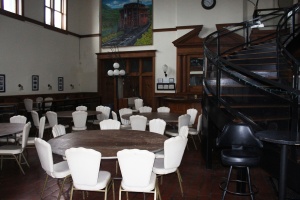 Cassile said the B&O Station is a good meeting place for people. She said she used to come to the station in grade school on field trips and that it’s a place where people can meet downtown.

“We have great atmosphere, we have great property and our events that we run that are indoor, outdoor in the summertime, are laidback,” Cassile said. “It brings people together.”

Amy Komara, manager and event coordinator of the B&O Station, said it started as one of the main transportation locations back in the day and has come a long way.

“At this point, I think that the history of the railroad station combined with our valley is just as stable,” Komara said. “Every event we can do that gets people into the city and aware of what it has to offer helps.”

Komara said the B&O Station is still undergoing changes and she said hopefully, it will be for the better and that it will draw more people in. She said the B&O grounds is a great space and the station is always looking to book events.

Bill Lewis, photographer for The Vindicator, said he loves seeing old things repurposed. He said the B&O Station is a lovely building and a great landmark downtown.

“There’s a lot of revitalization going on downtown and it’ll be great to see,” Lewis said. “I hope at some point it can be used more.”