After a disappointing freshman year due to injury, Youngstown State University safety Kyle Hegedus is ready to go.

Hegedus tore his right ACL during YSU’s game against the University of Northern Iowa. He recorded just five tackles before he got hurt as a redshirt freshman. 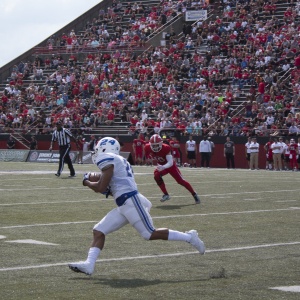 Three games into the 2017 season, Hegedus has recorded 22 tackles with one interception. He is an important piece of YSU giving up just 37 points this season.

“Coming off an ACL injury, I’m sure that was tough for him,” YSU linebacker Armand Dellovade said. “He was in the weight room every day. He was making sure he was ready for the season.”

Dellovade added that he’s glad Hegedus is back because of how good of a player he is.

Hegedus is currently the leading tackler on the team with his 22 just ahead of linebacker Lee Wright and fellow safety Jalyn Powell with 21.

“He had injury but he’s one of the hardest working guys that I’ve ever been around,” YSU defensive backs coach Richard McNutt said. “Almost a week after he was hurt, he was back doing rehab. He was working his butt off. It had definitely paid off for him.”

McNutt said he loves the way Hegedus keeps everybody on the field where they need to be.

Before Hegedus came to YSU, he was a star high school safety for Lakewood St. Edward’s in Cleveland, Ohio. He recorded 135 tackles, four interceptions and 12 pass breakups in route to a Division I championship.

Hegedus spoke about how he has recovered from the injury and how he felt about it.

“At first, I did a little bit of special teams and I was backup safety with the next man up mentality,” Hegedus said. “My whole plan was to play as much as I could. I was getting good leadership behind Leroy Alexander and those guys. Then, I ended up going down.”

Hegedus said all he could do was just get back up and get going on his recovery.

“He was ready to play for us last year. He has always mentally prepared himself,” McNutt said. “Now that he is physically ready, we are not missing a step. He’s able to jump on in and get the job done.”

McNutt expressed how important it is to use Hegedus’ smarts on the field to push the Penguins play further than ever.

“We just gave him positive reinforcement. It was like, ‘hey, just keep working man.’ It isn’t much to say but I’m sure it goes a long way,” Dellovade said.

As the anchor of YSU’s defense last season, Dellovade recorded 2.5 sacks and 105 total tackles. This year, Dellovade had just 15 tackles but seems perfectly fine with not being the top tackler.

“It definitely is not fun at all. Especially since I have to wear a brace and it hasn’t even been a year since the injury,” Hegedus said about playing after the ACL tear. “It definitely does suck. It’s just something that I’ve had to adapt to.”

Hegedus also said there are occasional hesitations in his game but nothing that slows him down.

“He prepares the right way. He prepares for success week in and week out. The things that he does make mistakes on, he works hard to correct,” McNutt said.

McNutt also added that Hegedus is a great young man who always puts himself in great position for success.

Hegedus and the Penguins will get a test with the start of Missouri Valley Football Conference play on Sept. 30.