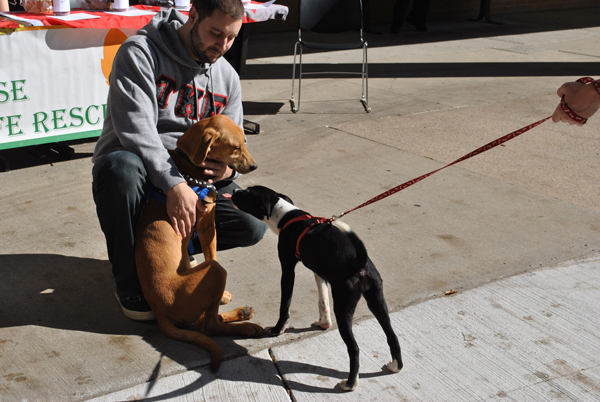 In an effort to assist the New Lease on Life Rescue animal shelter in Struthers, the Tau Kappa Epsilon fraternity has showcased dogs and puppies all week in front of Kilcawley Center.
By collecting donations and passing out flyers, the Youngstown State University fraternity is out to accomplish a couple of goals.
“We’re doing two things at the same time,” said Craig Dudek, a fraternity member. “We’re raising funds, and we’re raising awareness for the shelter.”
TKE became involved with the shelter through an alumnus of the fraternity.
“He’s always been very involved with the shelter, so we wanted to do him a favor and help him raise awareness for the shelter itself,” Dudek said.
Each day this week, TKE members have brought two dogs to campus to interact with students and attract attention to their efforts. Dudek said the reception has been better than expected.
“I think people see a couple puppies walking around campus and that automatically attracts attention,” he said. “So that’s a great opportunity for us to kind of promote the shelter and what it’s about.”
The shelter, located in Struthers at 2777 Midlothian Blvd., offers adoptable cats, kittens, dogs and puppies. It also provides numerous sponsorship opportunities for various prices.
“We’re bringing a couple dogs everyday to say, ‘Hey these dogs are up for adoption. Come take a look at them,’” Dudek said. “And we hand them flyers to say, ‘Hey check out the shelter, too, because there’s more where these came from.’”
At the stand in front of Kilcawley, TKE is also offering a Chinese auction with numerous prizes.
“We’re raising funds by asking for donations, but the Chinese auction is another way to continue those efforts,” Dudek said. “People should come check it out and support the shelter.”
The shelter is open to anyone from 5-8 p.m. on Thursdays through Sundays. All other days and times require an appointment.
TKE and the select animals will be in front of Kilcawley through Friday.
“We were hoping for a good turnout, and we’re happy so far,” Dudek said.  “We’re pretty confident and excited about this fundraiser.”