Youngstown State University golfers were selected as Women’s Golf Coaches Association (WGCA) All-American Scholars for their above par efforts in the classroom during the 2017-2018 school year.

Megan Creager, Kara Raines and Courtney Shutt made the All-American Scholars team by meeting the requirement of maintaining a minimum cumulative GPA of 3.5.

The total number of collegiate golfers who received this honor was 1,011; 18 of which were from the Horizon League.

“It truly is so rewarding knowing that all the hard work you put in the classroom and on the course pays off,” said Shutt, a four time winner of the award.

Shutt, who finished her YSU golf career last year, earned a 3.8 GPA as an exercise science/pre-physical therapy major. She accredits her ability to maintain a high GPA and still excel on the golf course to a mix of consistency and time management.

“On van rides or plane rides to our tournaments, my books were always pulled out and I was studying,” Shutt said. “To me, getting school work done before we played was important so I could focus on golfing.”

Her focus on the golf course has led to getting into the YSU women’s golf record books earning the fifth lowest career average with a 79.9.

Shutt’s last year with the women’s golf team was the first for Raines; an international business major who sported a 3.95 GPA.

It was her first time being named an All-American Scholar, but Raines said she had won awards similar to this as a golfer at Olentangy High School.

Time management was the name of the game for Raines. She said she was able to juggle academics and golf by properly managing her day, as well as keeping in contact with her professors and athletic and academic advisors.

Creager lies near the middle of Shutt and Raines, being named WGCA All-American Scholar for a third consecutive year.

Creager’s plan for her final golf season is to take the team to a conference championship by shooting a career best. 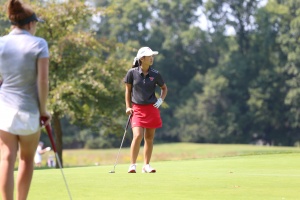 All three women have similarities as to how they all started in golf. Shutt and Creager both claim that being cut from other programs in middle school pushed them into the sport. Creager and Raines credited their fathers for introducing them to the sport before middle school.

There was also a similarity in what keeps them pursuing golf scores below 80 and test scores above it, which is the support they received from their family and friends and the lessons they’ve learned from playing.

“I continued golf collegiately because it introduced me to a lot of my best memories and friends,” Raines said. “It also made me who I am today by teaching me about being patient, honest and working hard.”

YSU Women’s Golf will begin the 2018 season on Sept. 3, competing in the Roseann Schwartz Invitational at the Mill Creek Park Golf Course.