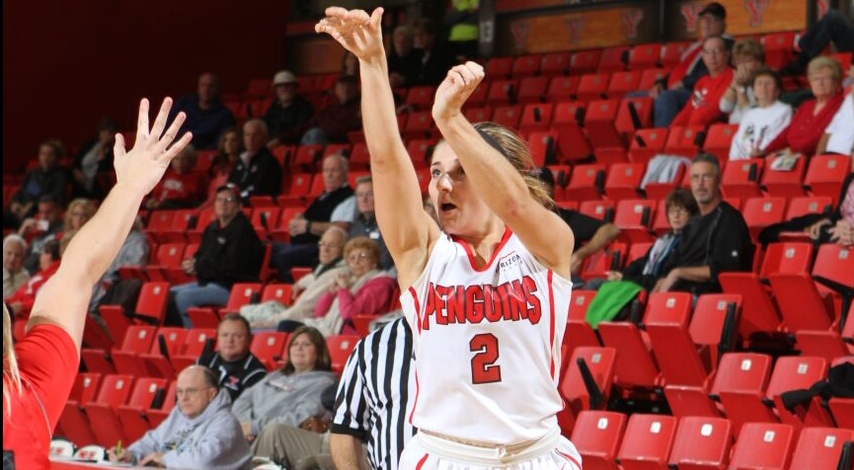 With Youngstown State University women’s basketball (7-10, 3-3 Horizon League) coming off only their second two game win streak of the year, they would look to make it three in a row.

They faced Cleveland State University (9-8, 4-2 HL) who previously defeated YSU 71-68 in Cleveland on January 31, 2016. The Penguins looked to avenge that loss in which they held a 10 point lead before losing.

YSU was able to avenge that loss with a 92-67 win over the Vikings.

With a slow first quarter from both teams, CSU led 11-10 with 4:42 left in the first quarter. CSU was led by forwards Alexis Eckles and Jade Ely who combined for nine of YSU’s 11 points to start the quarter.

CSU and YSU were tied at 23 at the end of the first quarter with YSU’s Alison Smolinksi leading all scorers with eight points. Eckles led CSU with seven points. Both teams shot well with CSU shooting 53 percent in the quarter.

“I actually didn’t know I tied the school record,” Smolinski said about tying the school record of eight three-pointers. “It feels pretty good. I used to think about my shooting more but I’m much more confident. I’ve been working on my confidence.”

She also said that getting three consecutive wins at home is what they needed to continue this season on a high note.

At the 6:32 mark of the second quarter, CSU was forced to call a timeout after YSU went on a 12-4 run to open the quarter. Jenna Hirsch led the run with six points in the quarter.

“We definitely took a step forwards,” YSU head coach John Barnes said about the win. “I thought our defense could have been better in the first quarter but in the other three quarters, I thought we did a good job.”

Barnes also said offensively they seemed to move the ball very well and did a good job of finding the hot shooters.

In the third quarter, YSU was led by Smolinski who scored 16 points in the quarter. Benjamin also kept her energy alive along with Jenna Hirsch. The Penguins were able to keep the pedal to the metal in the quarter. Smolinski led the team with a career-high 26 points after three quarters.

Smolinski also scored 12 consecutive points, all three pointers, for the Penguins as that forced a CSU timeout with 1:23 left in the third quarter. YSU led 66-48. At the end of the third quarter, YSU led 69-53 after a Morgan Brunner buzzer-beating shot to end the quarter.

In the fourth quarter, it was more of the same. The Penguins led 78-60 with 4:41 left. Alison Smolinski led the Penguins with a career-high 30 points along with tying the school record with 8 three-pointers.

“They are really good players,” Barnes said. “We through everything at her and everyone we could, and she [Abshaw] still had 18 points and nine rebounds. There’s no real stopping her but in the first game, she had 27 points. Jade [Ely] got in some early foul trouble but those two along with Livingston are a good group for sure.”

YSU will now go to the state of Michigan to face Detroit Mercy on January 20 at 7pm, and then they go to play Oakland University on January 22 at 3pm.