At least 2,500 people gathered at the Out of Darkness Walk to raise suicide awareness and funds for the American Foundation for Suicide Prevention on Saturday.

Strangers shared hugs and tears were shed, while suicide survivors and people remembering lost loved ones walked at the event.

As reported by the Centers for Disease Control and Prevention, suicide is the 10th leading cause of death in the United States; each year 44,193 people die from suicide. 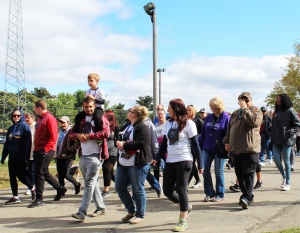 Suicide is the second leading cause of death in Ohio for people of ages 15-34. Additionally, one person takes their own life every five hours in Ohio, according to the CDC.

The goal of the AFSP is to invest in new research, create educational programs, advocate for public policy and support survivors of suicide loss.

Ciera Johnson, a suicide survivor, said she felt as if she was walking around with the words “I attempted suicide” tattooed on her forehead after she attempted to end her life.

One day, an important person in her life explained to her that an attempted suicide does not define her and Johnson said she realized he was right.

As reported by the CDC, for every death by suicide in the United States, there are 25 attempted suicides.

The walk began at the Wick Recreational Area at Mill Creek Park in Youngstown at 11 a.m. To mark the beginning of the walk, doves were released to the song “I Believe I Can Fly” by R. Kelly.

People donned shirts with pictures of loved ones and held signs to raise awareness.

Beads were given out at the event to symbolize each person’s personal connection to the cause. Each color represented the relation a person had to someone who died by suicide or a struggle with mental illness.

Johnson said she regrets trying to take her own life, knowing her family and friends would do anything for her and that there is so much to live for.

“Since then, I’ve graduated college, made some great friends, reconnected with old ones [and] I don’t have to attend counseling anymore,” she said. “But mostly, I’m starting a new life [where] I can call the shots and depression doesn’t call the shots for me.”

Cindy and Steve Orslene lost their son to suicide in 2013 and she said this walk is a form of therapy for them and others.

“Three years ago was our first walk and it was going to be abolished. I thought, ‘no, they can’t do this,’ because I know how good I felt [from] the walk,” Cindy Orslene said. “I’m hoping there’s a lot of people that I’m helping.”

Natalie Preusser, a suicide survivor, wanted people to know they are never alone.

“We need to stand together and face the terrible demons that attack everybody,” she said. “While growing up, kids are told to never judge a book by its cover, but by instinct many people do.”

She said many faces she sees today are not people she would think have struggled with suicide or the loss of a loved one by suicide.

“It’s amazing how much someone has gone through or dealt with that allows you to connect,” Preusser said.