More than 5,000 people gathered at the Mill Creek MetroParks Farm in Canfield, Ohio to view the partial solar eclipse on Monday.

The Youngstown State University Physics and Astronomy faculty and students worked together with volunteers from the Metroparks Farm for the community to safely view and enjoy the event.

The eclipse was viewable in totality across 12 states from Oregon to South Carolina. The last time an eclipse was visible from coast to coast in the United States was 99 years ago.

Patrick Durrell, physics and astronomy professor and director of the Ward Beecher Planetarium, said that solar eclipses occur in the first place because of luck. 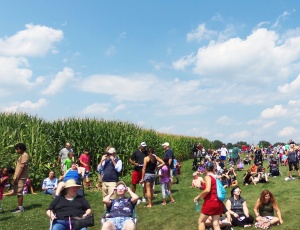 “The sun is 400 times bigger than the moon, but it’s also 400 times further away from the Earth than the moon, so the alignment is just right. The moon just covers the entire sun,” Durrell said.

The Physics and Astronomy Department provided 1,000 pairs of solar eclipse glasses at the event. They also had activities such as pinhole projectors, coloring for children and tracing the path of the solar eclipse.

Three telescopes with solar filters were available to view the eclipse, as well as equipment to view live feed of the total solar eclipse.

“Through the glasses, you can see the sun safely, but it’s small. But looking through the telescope gives you the ability to see it in more detail. A lot of people were commenting on sun spots,” Durrell said.

Arthur and Ray Detwiler of Austintown reached out to the Physics and Astronomy staff before the event because they are telescope enthusiasts. They wanted their telescopes with solar filters to be used at the event for others to see the eclipse.

“Basically, the more telescopes, the better. We are just amateurs and wanted to help with this opportunity,” Ray Detwiler said.

Durrell believes it is one thing to look at the NASA feed of a total solar eclipse or to see pictures, but to actually see it live is truly something, even if it is not in totality. He said many people asked if the solar eclipse is a once in a lifetime event.

“Actually, I can’t say that because we will have one in seven years,” Durrell said.

Durrell has not seen a total solar eclipse yet himself, but hopes to in 2024 because it will pass through Cleveland.

Although a large turnout was expected at the viewing event, Durrell said there was no way to truly estimate it.

“About a half an hour before we began giving out the glasses, the line was all the way down the parking lot,” he said.

Carol Vigorito, recreation and education director of Mill Creek MetroParks Farm, was grateful for what YSU was contributing for this event and thought it went well.

“Everyone was happy with standing in line to wait for their solar glasses or to view the eclipse from the telescope. I think everyone who came was happy with the outcome,” Vigorito said.

One thought on “Thousands Gather to View Partial Solar Eclipse”