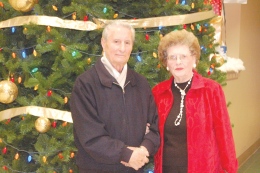 Clair and John Naluso stand in front of the Christmas tree downtown at the old Phar-Mor building. Photo by Candance Mauzy/The Jambar.

Claire Maluso, 82, remembers the hustle and bustle of downtown Youngstown during the Christmas season. In the 1960s, she worked for the Strouss Company, which was located in the former Phar-Mor Building on West Federal Street.

Claire Maluso was the plaza director from 1988 to 1998. Today, she is a member of the Cityscape board.

Claire Maluso has lived in Youngstown all her life and takes a special pride in the downtown history, especially the old days of shopping, parades and flourishing businesses.

Before the age of shopping malls, holiday shoppers flooded the streets of downtown. In those years, the downtown Christmas parade brought thousands of people between Thanksgiving and the New Year. From one end of Federal Street to the other, businesses filled most of the now vacant buildings, Claire Maluso said.

“At one time, we probably had 500 businesses between Rayen Avenue and Front Street, West Federal Street, Commerce Street, Boardman Avenue and clear up on Wood Street by Youngstown State University,” Claire Maluso said.

Claire Maluso looks down at an outdated map, which details the flourishing downtown business district.

“When you came down Federal Street, there was not a place that did not have a store. You had Kirby Shoes, Strouss, McKelvey and Hartsells, to name a few. This map can show you a world of things about Youngstown,” she said.

Every floor of the Strouss building had a personality. Claire Maluso climbs the stairs in her memory.

“The first floor had jewelry, the general store and a bakery. The mezzanine had a tailor shop, a camera shop and restrooms. The second floor had items for the kitchen. The third floor was women’s finery and juniors dresses,” she said. “At Christmas time, you would see a talking snowman on your way up to the fourth floor where Santa was sitting next to a tree to greet the kids. The fourth floor was all furniture. The fifth floor was household and more furniture, and the sixth floor was household complete and the auditing office, and the seventh floor held windows, interior design and advertising. The eighth floor was a bakery.”

Claire Maluso walks through the streets of Youngstown from decades ago. Each shop and each face stands out in her reverie.

“Every window was so important. There were decorations everywhere. People would walk up and down the street, looking at the beautiful windows. [There] were Santas and angels from one end to the other. It was different times cause we only had one central business district and people didn’t have cars then,” Claire Maluso said.

“They were on a track with a power cable, and from the back end there was a big pole that went up. The wind blew and knocked the pole down, and the bus drivers would have to get out and fix them,” he said.

John Maluso graduated from the former Youngstown College in 1949. Now 87 years old, John and his wife have lived in Youngstown their entire lives, celebrating Christmas as time has taken its toll on the city.

The Youngstown Board of Trade met monthly back then. Through the holiday, money was raised to sponsor events. All the stores would contribute, the Malusos said. It was a collaborative effort.

“There would be advertising galore for radio at that time. This was the way of things because there were no malls,” John Maluso said.

Claire Maluso would participate in a jingle bell program for schools that recruited students to work in retail.

“When I worked with Strouss, we always participated in the parade. As a matter of fact, our personnel director would be Mrs. Claus every year. That became history. We did jingle bell programs every year with the schools,” she said.

Kids would earn money for the holidays. Maluso would teach the program at South High School and Choffin Vocational School. Strouss would hire the program graduates.

The bustling holiday spectacle lasted until 1974 when the mills closed, the Malusos said. Some festivities continued as Federal Street was blocked when many retail stores went under.

“It was common for business districts to close the streets and allow pedestrians to walk around and see things. But that was because all the retail began to leave,” she said.

Claire Maluso will never forget standing beside 50,000 people to cheer on the Christmas parade. She remembers every high school band in the area marching through the sea of decorations and storefront displays.

“Youngstown was a great, active city in those days,” Claire Maluso said. “That was the place to be in those days.”