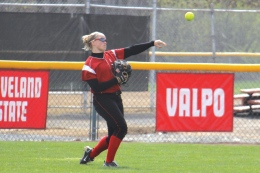 Senior Haley Thomas throws the ball to the infield after making a catch in center field during Sunday’s game against Cleveland State University. Thomas has started every game in center field since 2009. Photo by Dustin Livesay/The Jambar.

Senior Penguin center fielder Haley Thomas, originally from Florida, has seen a lot of firsts since her freshman season in 2009, including snow. She was so excited that she called her father.

“Well, are you playing?” he’d responded.

The Penguins fell, 4-3, to George Mason University. Thomas went 1-4 at the plate.

Since her snow encounter, Thomas has started on each of her 172 games in center field.

“She’s held that spot down for four years, and she’s done an amazing job at it,” senior Kristen Philen said.

Thomas has also batted first in the lineup for nearly all games played.

“As a leadoff hitter, it’s nice that she can lay down a bunt. She can hit it for power, and she also has a great eye that gets on base,” Campbell said. “It’s nice to have Haley up there when the bottom half of the lineup gets on base, and you have that option for a young lady that can swing the bat.”

Thomas said batting leadoff is comfortable, and she likes being there.

“I would feel weird if I was somewhere else [in the lineup],” Thomas said. “I’ve had it, and I wouldn’t want anything else.”

Playing every game helped her achieve a school record this year.

Trailing 5-4 in the bottom of the seventh inning on Tuesday at the University of Akron, Thomas rocked a two-run homer that put Youngstown State University ahead by one run.

Greeted by a mob of Penguins, Thomas not only gave her team the lead, and eventually the win, but also broke the school record for most career runs scored with 127.

Thomas’ record-setting run might have never happened if she’d listened to head softball coach Brian Campbell, who was giving her the bunt sign.

“There are some things you can forgive,” Campbell said.

“Once I scored, first I realized that we were winning now, and then I realized that I’d just broken that record,” Thomas said. “I think putting our team up felt more important, especially because we kind of butt heads with one another, and I don’t like Akron.”

Thomas won the HL Softball Player of the Week award on March 19. She hit .500 in five games, all victories.

Thomas said she knew since her senior year of high school that YSU was a perfect fit.

“I really just clicked with YSU,” Thomas said. “I felt like I could go here and just enjoy it. With the other schools I visited, I didn’t really feel that. Something just wasn’t right.”

Thomas has helped the Penguins to a 19-6-1 start this season, and she said it’s mainly due to her team’s effort.

“I feel like every win we have is a complete team effort, and I don’t think we really had that before,” Thomas said. “We were never really on the same page. I feel this year we’re all doing our role.”

“It’s been great to have those young ladies lead the younger kids,” he said. “I think they’re teaching more than just the outfielders.

They’re teaching these young ladies how to compete. When you have those two in the outfield, it makes it a lot easier on you.”

When a game begins, Philen said Thomas is one of the most serious and determined players on the field.

Before her collegiate career ends, Thomas said she wants an HL championship.

“I don’t want anything else right now,” she said.