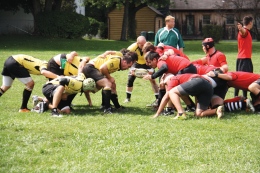 The Youngstown Steel Valley Rugby Club battles Pitt City in a match on Sept. 24. The club’s next scheduled event is a tournament on Saturday in Pennsylvania before the Mike Hartzell Rugby Classic on May 19. Photo by Dustin Livesay/The Jambar.

Nine years ago on Sunday, Michael Hartzell, a Youngstown Police Department patrolman, was fatally shot in his police car while at a red light on West Federal Street.

According to the Officer Down Memorial Page website, Hartzell, who was filling in for an officer who called off, pulled over a car on his way back to headquarters. Hartzell did not initiate a traffic stop, but ran the license plate. The driver then exited the car and opened fire.

His parents, Howard and Mary Kay Hartzell, woke up at 2 a.m. to the sound of a phone call. It was a nurse at St. Elizabeth Health Center.

“You need to come to the hospital,” the nurse said over and over.

“Michael was in an accident.”

While his parents made their way through a sea of police badges and black uniforms, Mary Kay Hartzell asked how her son was doing, but nobody knew.

Then, a doctor took the two into a room at approximately 3 a.m. and told them that Michael Hartzell had died. Howard and Mary Kay Hartzell could not see their son because he was “too bad” from the gunshots.

Mary Kay Hartzell said her son, also a former Cardinal District volunteer firefighter, was a quiet kid who always knew he would be a police officer.

“He told me before he graduated high school that that’s what he wanted to be,” she said. “He never gave us any trouble; he was a good kid.”

Six active police officers play for the Youngstown Steel Valley Rugby Club, and the club wants to raise money for the scholarship.

To do so, it will host the first Mike Hartzell Rugby Classic on May 19 at Austintown Fitch High School.

All proceeds and donations will go toward the Michael T. Hartzell Memorial Scholarship Fund, which, according to the event’s Facebook page, is awarded to the children of Mahoning County police officers who plan to attend YSU.

According to the Rugby Classic’s Facebook page, 83 people accepted the invite, 69 said maybe and 1,792 are pending as of Monday at 6:30 p.m.

Youngstown will face the Canton Rugby Football Club in one full match. Gates open at 4 p.m., and kickoff is at 5 p.m. Admission is $5 at the door.

YSU Police Chief John Beshara first heard about the event on Monday and said he might attend, depending on his work schedule.

“I think police in general always give back, but these events are significant for Mike Hartzell and the policeman that he was,” Beshara said. “He had a long life ahead of him, and it was cut short.”

Brett Grabman, a Lordstown police officer and president of the rugby club, said the team wants to give back to the community while also getting its name out.

“Helping out a couple of students is obviously going to be a good thing, and that’s kind of like the secondary issue,” Grabman said.

“The main issue for us was that we wanted to show the community and Youngstown State that we are a part of the community.”

Matt Ruse, a graduate of Kent State University’s Trumbull campus, is in his first year with the team and will be playing for his kid brother, YSU freshman Marc Ruse.

“I really don’t know much about it,” Marc Ruse said, regarding the event. “My brother’s in it, and I’m kind of proud because he’s helping out a cause … getting the Hartzell family out there and honoring them.”

Marc Ruse graduated from Cardinal Mooney High School in 2011 and was this year’s recipient of the scholarship, along with freshman Derek McLaughlin, sophomore Olivia Bolender and freshman Daniel Farinelli.

“I heard about [the scholarship] through my father, who is a police officer for Youngstown,” Marc Ruse said. “It’s helped me get closer to the community.”

Matt Ruse, a reserve officer for the Mahoning County Sheriff’s Department, said the goal is to “get it going, start the tradition this year and just kind of patch that down.”

“We figured this would be a pretty good route to go, and just show we wanted to give back to the community and help someone out,” Ruse said.

Howard Hartzell said that whenever somebody in the community has an event for Michael Hartzell, it’s heartwarming.

“Mike’s past is still remembered, and his future,” he said.