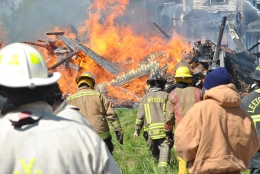 The live fire training is the final part of the program and takes place at homes slated for demolition.

“We bring them in and expose them to a real fire scenario,” said YFD Battalion Chief Silverio Caggiano. “They get the training, and we burn the house down. The city saves some money. It’s a win-win.”

The home used for the training was on Ford Avenue behind CVS on the city’s north side. It sat next to another vacant home Caggiano said was also on the city’s demolition list.

Caggiano said there were several people without any affiliation to the area fire departments involved in Friday’s training.

“This is as real as it gets,” Caggiano said. “This is where you find out whether you really want to be a firefighter or not.”

Hayleh Cleland stood nearby the scene holding her child. She was there to support her husband Josh Cleland, a fire cadet who took part in the training Friday morning.

Her nerves were running high and said it’s more worrisome to think Josh could one day be inside a burning home.

“It’s something he wants to do so I’d support it,” Hayleh said.

Hayleh won’t be at the scene of every fire her husband fights. She said being there Friday made her feel better about his job.

“I just see what you see on TV, but it’s a lot more calmer right now,” Hayleh said, referring to the fact that this was set up and nobody was inside the home. “[Josh] did a good job from what I seen.”