Students from Youngstown State University and various other schools participated in a hackathon in the DeBartolo Stadium Club Room over the course of three days for the third iteration of HackYSU. The event was put together by Youngstown Penguin Hackers and was part of Major League Hacking’s 2017 season.

The event started Feb. 17 and concluded Feb 19. During those three days, students ranging from various experience levels created technology projects such as applications, devices and games.

Joe Duncko, HackYSU director and chair of Youngstown Penguin Hackers, said that he is seeing two major themes at this year’s HackYSU. The first is 3-D printing. 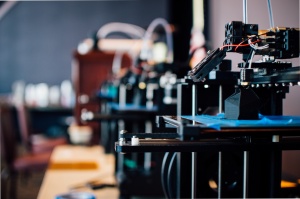 The other theme he saw was virtual reality.

“Major League Hacking helps supply a lot of Oculus Rifts as well as a lot of students, especially the Penn State students, are known for bringing their HTC Vives and their own Rifts,” he said. “They get started on their projects and those are really cool because they are super showy and look really nice.”

Some of the students participating in the event traveled from places as far away as Cincinnati and even Canada. Duncko said that those students, unlike the ones who live on campus or in Youngstown who could leave, have been there for the entirety of the event.

Duncko also said that the event is a great way for students to gain experience, learn and even add to their resumes.

“I’ve heard of people from HackYSU one and two, this being the third, that their experience here was the reason they got their current job,” Duncko said. “Our goal is to help students work on projects in both their free time and environments such as HackYSU.”

Kendra Corpier, a judge at HackYSU and organizer for Youngstown Game Developers, said that there are two things that she is looking for while judging what the students have made.

The other thing the judges looked for is how much tech was involved.

“If someone made a video game for fun versus something that’s going to help humanity, then I’ll probably lean more towards humanity in this case because that’s what hackathons are about,” she said.

At the end of the event the winners were announced. The overall best project went to University of Akron students Kyle Vasulka, Bridger Garman, Julie Aichinger, Elissa Peters, and YSU student Jonathan Sternthal. The group developed an app that allows the user to use their Android smartphone as a mouse for a computer.

Vasulka said that the idea for the smartphone mouse started when he forgot his mouse at home and didn’t realize until he got to the event.

“We had no idea what we wanted to do for this hackathon; we took out our laptops, I reached down for my mouse and my mouse wasn’t there. I said ‘oh no I’m going to have to do this whole hackathon with just my trackpad.’ I got out my phone, I went to go text my roommate to make sure he had it and when I saw my phone it clicked,” Vasulka said. “Oh hey I have a smartphone, I have a computer, why don’t I make a smartphone app that acts as a mouse and connects to the computer?”

Garman said that using your phone as your mouse gives you the ability to use more shortcuts than a normal mouse can.

“A regular mouse has a right click, left click, and then you have your scroll. If you’re a gamer you can also have the extra macro buttons. Well for this you’re only on a cellphone and you can have as many buttons that you want. So for one guy he does a lot of Excel and he can have a lot of shortcuts immediately on his cell phone,” Garman said. “Most phones have fingerprint scanners so you could be searching the web and say ‘oh I really like this’ and scan your fingerprint and buy it.”

They also 3-D printed a hemisphere trackpad that sticks to the back of the phone so the user can use their device just like a traditional mouse.

Moving forward, the group plans on putting an app on the app store and making their product compatible with iPhones as well.

Also during the event was an hour long expo in which students showcased what they’ve been working on to the judges.

“Oculus Drift” is a VR audio and visual entrainment project developed with an Oculus Rift by Penn State Erie student Kyle Salitrik, which was made to help people who suffer from insomnia or anxiety calm down or fall asleep.

“You use the Oculus and it puts you into a space where you’re drifting through a nebula and it plays by neural beats along with changing the color palette for different ways to make your brain calm down or make you more active,” he said.

Salitrik said that there are three different states in the experience with each serving their own purpose.

“There’s a state for deep sleep or meditation, a middle state for just relaxation and then a third state for active thinking,” he said.

Jordan Vigorito, a business student at YSU, went into the hackathon with no technical or computer knowledge but was still able to produce a device with help from Daniel Day, who Vigorito referred to as his partner and mentor. 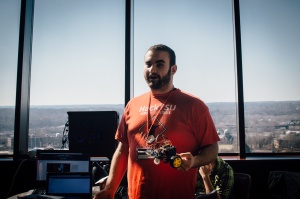 The project involved creating a vehicle that was able to sense objects in front of it and prevent itself from running into those objects.

“I had no technical knowledge or computer knowledge to be able to deal with the hardware or the software requirements of being able to build the project,” Vigorito said. “Between Dan, two faculty members at YSU, a graduate student and a previous alumni, they pretty much spent the 36 hours giving me crash courses in electronics, C++ and in general how things work. Like how a DC motor works in the confines of this scenario. It was just a very good time overall for me.” 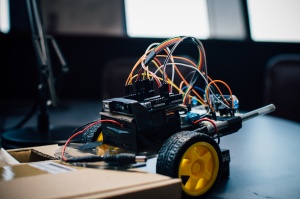 Day added that he thinks events like HackYSU are important because they can teach someone how to do a task that they have no previous knowledge on.

“I would say that the most important thing with this is that people are extremely intimidated by stuff like this and this just goes to show you that somebody with zero knowledge on something can sit down and in [a] weekend learn how to do some very basic things with computing,” Day said. “I think that’s why a lot of people shy away from programs like this because they think ‘that’s way too complicated for me.’ No, you can do it and if you sit down and want to learn it you can.”