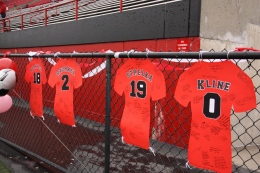 Make-shift jerseys representing the senior players hang from the gates of Stambaugh Stadium during the soccer team’s last game of the season. They finished 3-10-4 overall, with their last win occuring Sept. 2 after starting 3-1-1. Photo by Dustin Livesay/The Jambar.

The Youngstown State University soccer team wrapped up its season Saturday in a 0-0 tie against Valparaiso University. The Penguins ended the season with a record of 3-10-4 (0-5-3 in the Horizon League).

“I think we had to grow up a little bit, and learn how to finish and beat teams,” head coach Will Lemke said. “But we aren’t able to close them out, and we have to learn to do that and break out of that habit. We have to learn to start finishing out teams.”

“Overall on the season, we had some unlucky breaks,” senior defender Kelsey Kempton said. “This entire season, we would lose some games by just a goal, and I thought we were in every one of those games. It just kind of sucks to lose all of them like that.”

“I thought the season went pretty well,” Kline said. “I thought it was a little disappointing because we should have won a lot more games. I think we had it within ourselves to do it, but we ended up losing by just one goal, just a little lapse.”

The team dropped six matches by one goal.

Lemke said he was encouraged by the way the team progressed as the season went on, despite the declining record.

“I think it got better by the end of the year,” Lemke said.

The Penguins, however, finished near the bottom of the Horizon League in most statistical categories except saves. They were second in the conference.

Sophomore goalkeeper Ali Viola finished sixth in the conference with 60 saves while Kline ranked eighth with 42.

Although the season didn’t have as many wins as the team would have liked, there were still positives.

“Since I’ve been here the past four years, we have gotten progressively better,” Kempton said. “It’s going to continue to keep going like that and keep getting better.”

Kline said the team dominated most of its opponents, even though the record doesn’t show it.

Lemke agreed with his two seniors.

“We were outplaying teams, but I think we got so used to last year,” Lemke said. “Last year we were so beat up and so used to hanging in there with teams and staying close.

This season we were dominating a lot of the teams we were playing, especially at the end of the year.”

Lemke said the wins would come as the team gains experience.