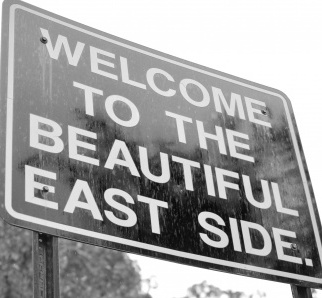 “It’s Camel,” an old man spat. The Royal Oaks regular shifted in his chair to face another patron who had committed the East Side sin of mispronouncing the small city’s name. “It’s called Camel. Campbell is a f—ing soup.”

Wild tufts of gray hair bordered his narrow, weathered face, and his sharp, aggressive tone kept him somewhat isolated even while flanked by patrons. Despite this, he still greeted each person seated at the bar and asked where they’d been, regardless of whether or not he’d ever met them. He was the embodiment of the East Side; tough, worn and a lot nicer than one might expect.

This reputation is only partially deserved. While the 2nd Ward does have it’s issues — it has the highest rate of property abandonment in the city, infrastructure problems and as of 2010, 16 percent of the Ward’s population was prisoners — it is also the largest of the wards and home to an array of fiercely independent business owners and citizens fighting to make the neighborhoods livable.

Drivers traveling through the 2nd Ward from downtown can expect to see typical urban zones eventually give way to deteriorating streets devoid of residents and homes. Beyond these abandoned zones — such as Sharon Line, essentially a ghost neighborhood that was zoned but never realized due to Youngstown losing the steel industry — lush, forested areas hide small neighborhoods and surprising landmarks, such as McKelvey Lake, which looks like it was plucked out of New Springfield and dropped in the middle of the city.

The city and organizations like the Youngstown Neighborhood Development Corporation and the Northeast Homeowners and Concerned Citizens group have been working to improve the Ward — initially through residential code enforcement, blight razing and spot beautification projects — and have plans in the works for substantial infrastructure repair.

However, considering the size of the Ward, it will take some time — YNDC’s latest plans for the Ward project out to 2020 — before many of the revitalization plans are realized.

In the meantime, East Side entrepreneurs must not only battle the ever-present struggles of small business ownership but also fight the Ward’s stigma to attract customers. Many of the businesses that survive in the East Side have done so by digging in and establishing themselves as neighborhood institutions.

“We operate pretty much off word of mouth … I hardly ever advertise. I don’t need to, I don’t have enough room,” Mastrey said. “Last night I sold 140-150 pounds of fish, during Lent you can double that.”

The restaurant is a greasy spoon diner, with an interior that’s small when compared to a corporate diner such as Denny’s, but the recently expanded dining room is large enough to be comfortably cozy. Mastrey attributes his success to the quality of his product and the wide variety of customers offering up recommendations for his establishment.

“People vouching for quality is what gets you customers here,” Mastrey said. “We get all walks of life in here. I truthfully don’t know why, but it happens. A lot of people are friends of my parents, and my father’s been gone for 35 years. It’s all grown out of friends of friends that keep coming back.”

Similar to City Limits, Brownlee’s Lawnmower Service — operating since 1998 — has thrived on the word of mouth from local customers. Though run from a brown, cement block warehouse full of lawn mowers and small engine parts, but lacking any sort of storefront or customer seating area, the parking lot of Brownlee’s is rarely empty.

Keith Brownlee is the owner’s son and a repairman at the shop. In between pulls of a lawn mower’s starter rope, Brownlee shared what he believed was the core of his family’s success.

“I’ll tell you what, the main thing is to treat people fair and do good business. That’s how my dad [Brownlee’s owner] made his reputation. He treats [customers] good and fair regardless of who they are and where they come from and you know stand behind your work,” Brownlee said. “That’ll keep you going — be fair and stand behind your work. He’s always had a good rapport with people and he’s an honest guy.”

While Mastrey has managed to keep his restaurant profitable for 15 years and Brownlee’s has been in operation since 1998, both operators are aware of the stigma attached to the 2nd Ward.

“I used to have a car show here, and I couldn’t get 50 cars to come here because the owners were afraid their cars would get stolen,” Mastrey said. “We could have a 2,000 car show here, no problem, but it just couldn’t get off the ground. People are goofy, they hear East Side and they start to shudder.”

Despite the city’s plans for revitalization, Mastrey — a 35-year resident of the East Side — feels that the 2nd Ward has largely been ignored by the city and high profile businesses.

“I think really what happens here is they neglect this side of town. Everything happens everywhere else until something bad happens, then there’s attention,” Mastrey said. “Why couldn’t we get a racino here? That flea market’s got 100-some acres. I don’t think they want to do anything with this side of town. I think they like it like this.”

Brownlee noted that the city’s aggressive code enforcement policies are a point of frustration for East Side residents.

“You know, I like the freedom of being out here, but at the same time, the city could use to come over to [McGuffey Heights] a little more. Prime example: if you ride down the street you’ll see a lot of dead houses, a lot of them owned by the city or whatever. They won’t cut the grass. But if you don’t cut your grass, they’ll come and fine you,” Brownlee said. “They got to be more involved in taking care of their stuff and making sure what they have is good. They’re on us about our stuff a lot but they don’t do the same.”

While both Mastrey and Brownlee have years of observation behind their criticisms, the city does have projects and plans through YNDC and the NEHOCC that are helping to improve conditions on the 2nd Ward. This does not negate their desire to see more city intervention, but instead highlights the enormity of the task facing organizations invested in revitalization of the East Side.

Ian Beniston, executive director of the YNDC, is responsible for the group’s day-to-day operations and ensuring YNDC hits their goals. When questioned about whether or not the city was truly negligent in its engagement with the 2nd Ward, Beniston provided a list of past, current and proposed projects set in the East Side.

“We’ve been working probably for the longest in the Lincoln Knolls neighborhood, repairing housing, a number of occupied properties and doing more currently. We’ve renovated housing and recently sold a renovated home to a new homeowner,” Beniston said. “We’ve got an action team and a fully-developed neighborhood action plan in place in that neighborhood, and we’ve helped them raise funds for neighborhood improvement projects.”

“We just wrapped up developing the greater McGuffey corridor action plan. We’ve been doing a lot of basic neighborhood clean ups, a lot of boarding up abandoned houses like we do all over the city. We’ve also been working with the Northeast Homeowners and the councilman [T.J. Rodgers] to revamp Jacobs Road, and that’ll include a whole new look for the landscape and the medians as well as neighborhood signage,” Beniston said. “We’ve also put together a micro plan for the Martin Luther King elementary school which … we’ll be using to apply for grant funds, which we’ll use to upgrade infrastructure including sidewalks and other basic neighborhood infrastructure. So, I’d say we’re doing the same if not more work on the East Side, and we plan on growing our influence there.”

The city is reaching out, and in time, the 2nd Ward may see the same transformation that’s happening downtown and in the Idora neighborhood. As the work is being done in the meantime, it will fall to local businesses to continue to hold the line and fight the East Side stigma — a reality Keith Brownlee recognizes.

“We can do what we can do over here … We got a responsibility too to keep things nice out here, so it’s gotta be work on both ends,” Brownlee said.

As for Mastrey at City Limits, he has no plans on shutting down anytime soon, regardless of how long it takes for an East Side transformation.

“There’s only a few people who put businesses over here, but our people deserve it,” Mastrey said. “I don’t plan on going anywhere, I’ll die here.”