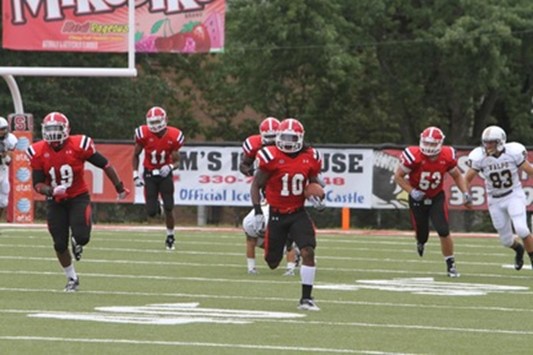 The Ice Castle will be quiet this fall after the football season was postponed due to COVID-19. There will be no steam whistle going off after every Penguin touchdown, no fans cheering from the stands.

However, nine years ago this week, Stambaugh Stadium was electric. This ‘Week in: YSU Sports History’ highlights the Penguins’ offensive explosion and record-setting performance against Valparaiso University in 2011.

Youngstown State University’s offense scored a school-record 77 points, with 63 of those coming in the first half. The previous record was 63 points, set by the 1994 National Championship team in their playoff opener against Alcorn State. The Penguin’s 77 to 13 victory also represented the largest margin of victory in program history, 64 points.

The Penguins broke or tied 16 different records on this day. Among the other school records set were, most points in a quarter – 35 in the first – and total yards – 657. Josh Lee set an individual record with a 96-yard punt return for a touchdown to give the ‘Guins a 14-point lead early in the first quarter. YSU also set a school mark with 34 first downs.

Five different Penguins contributed to a school-record 11 touchdowns. Tailbacks Adaris Bellamy, Jamaine Cook and Jordan Thompson all had two rushing scores. Torrian Pace and Parnell Taylor had one apiece, the first in their YSU careers. Sophomore Kurt Hess added two scores through the air, one to Andre Barboza and one to David Rogers early in the second quarter. The offense scored touchdowns on 11 of its first 12 possessions, and the only scoreless drive of the span came with a kneel down to end the first half.

The Penguins amassed a balanced 476 yards of offense in the first half – 272 on the ground and 204 through the air. Hess finished 12-for-13 for 204 yards, and his only incompletion came on a dropped pass early in the first quarter. Cook ran for 126 yards on 15 carries, and Bellamy rushed 23 times for 180 yards.

Youngstown State’s dominant first 20 minutes led to smooth sailing for the rest of the game. The Penguins kept the ball on the ground for their final 43 plays and attempted their final pass with seven minutes to go in the second quarter.

David Brown converted 11 extra points to become the only Penguin kicker in school history to eclipse double digits on extra point attempts and makes in a game.

The Penguins’ 77-point outburst set a tone for the rest of the season. The 2011 offense is the program’s highest scoring group on a per game basis. They scored 36.2 points per game, over two PPG more than Youngstown State’s second highest scoring squad. The 2011 offense also holds the school record for total yards per game. At 458.6 YPG, they outgained the offense second in YSU’s record books by 36 YPG.

Most people remember the great Jim Tressel-led teams of the 1990s best known for running the ball and playing stout defense. His football style resonates well with the lifeblood of Youngstown and its residents. However, for one Saturday afternoon in 2011, the Penguins were an offensive juggernaut never witnessed before or matched since.